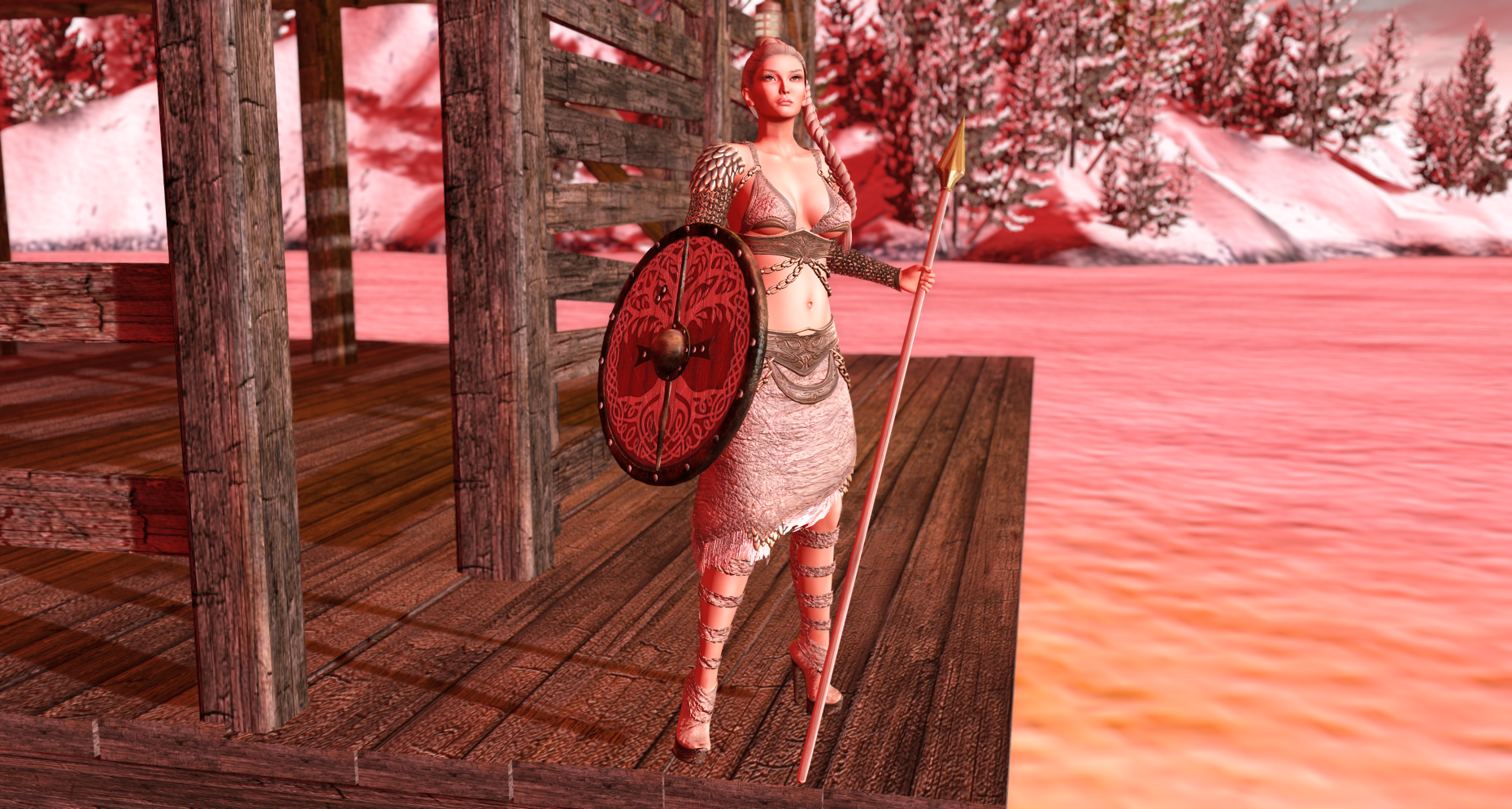 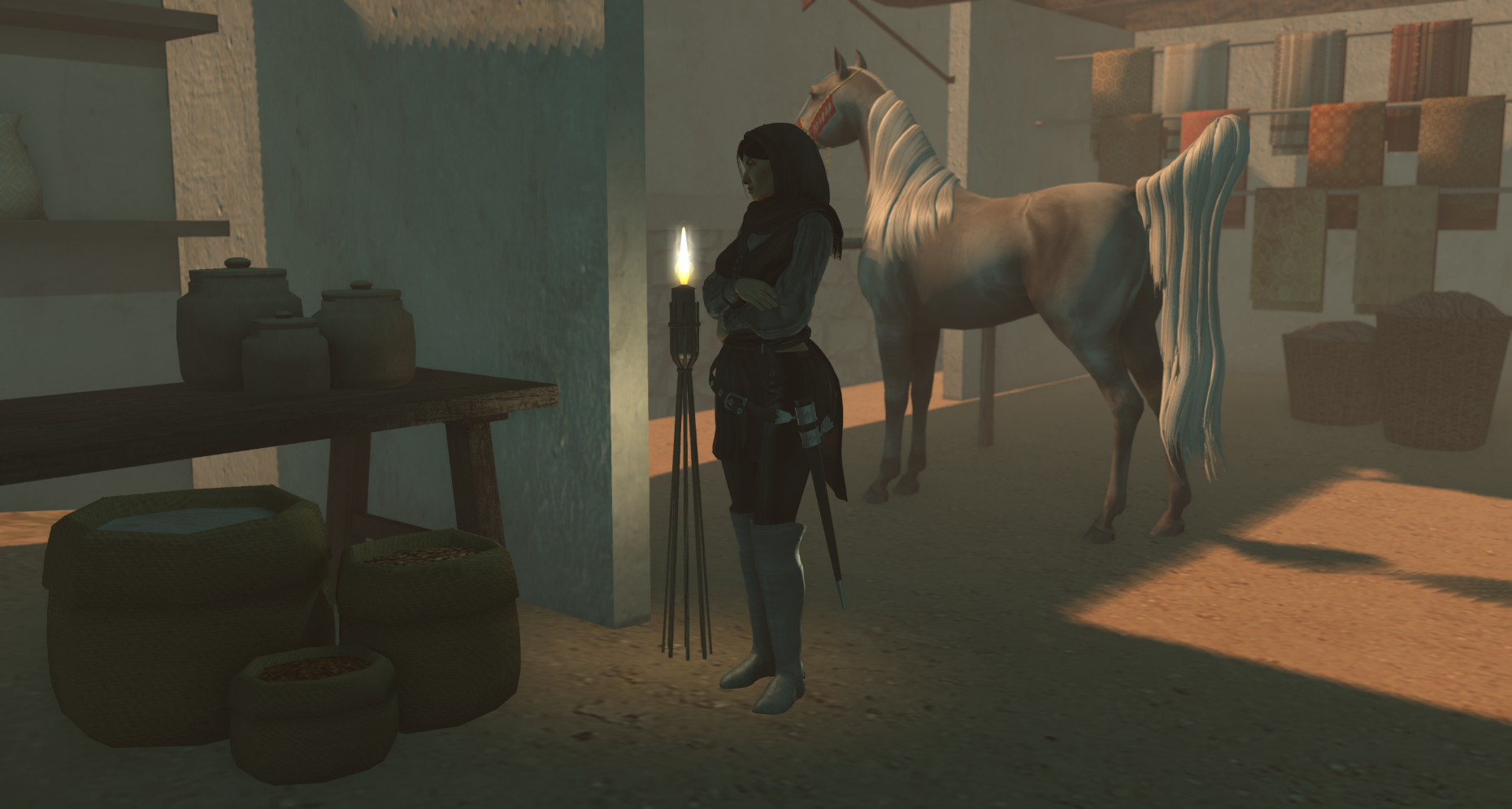 The second release from Del-ka Aedilis for The Fantasy Room is another entry in their massive Laketown set. The Captain’s Hall is a large and very grand house, fit to be the center of a town or village. The house has a total of 4 floors and plenty of rooms, including large ones suited for feasting and receptions but also smaller rooms suited as living quarters or as storage rooms. There’s also a dock where boats can be moored and the whole construction is set on stilts. 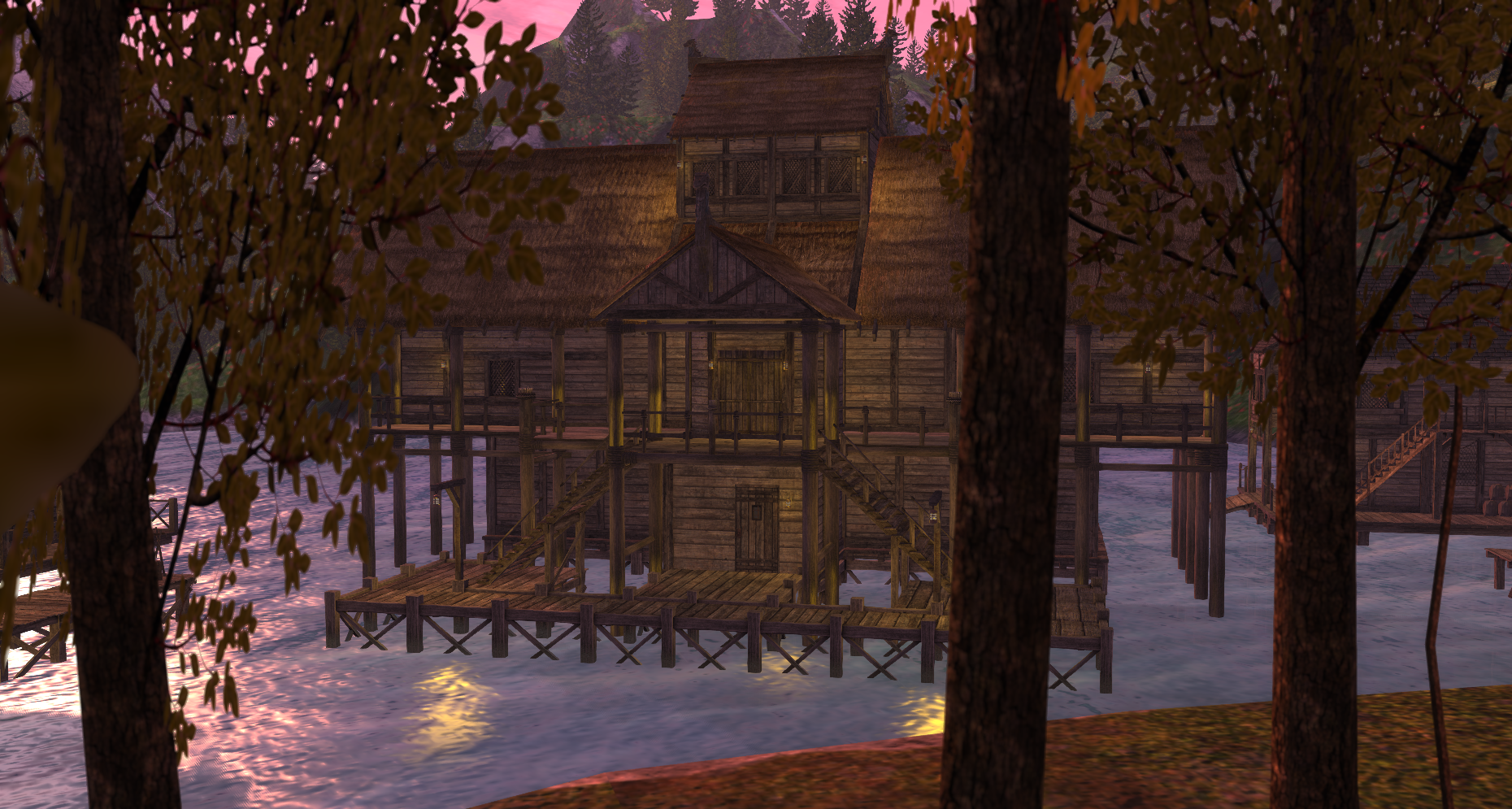 The Fantasy Room is a new event focusing on fantasy-inspired items, from accessories to buildings and everything in-between. For the first round, I am showing one of two releases from Del-ka Aedilis. The baker’s table, part of their series of medieval kitchen furnishings, features a nice setup of ingredients for baking and an in-progress dough. There are no animations loaded into the table but I used one from another kitchen set to give the appearance of kneading the dough.

My dress is from Tres and I love the little details on this style, such as the wrinkling of the bodice at the clasps and the fine embroidery along the neckline and at the cuffs. It is both rustic and pretty, something for a reasonably well-off farmer or a merchant. The bodies supported are Kups, Legacy and Maitreya (including Petite), but with the right alphas it should work on Slink too.  The dress was available at the previous round of We Love Role-Play, but should hopefully be in the mainstore for Tres soon if it isn’t already there. 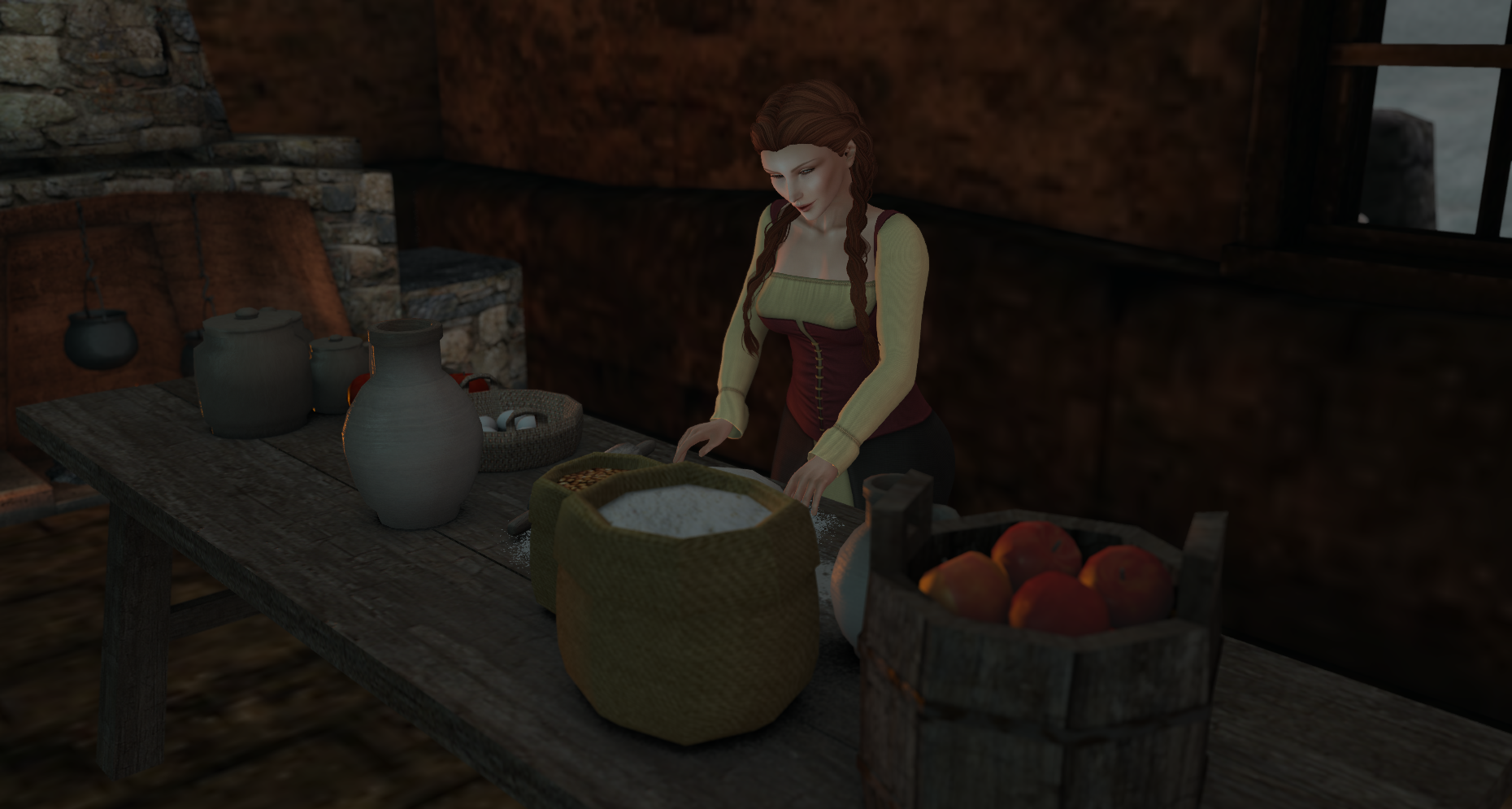 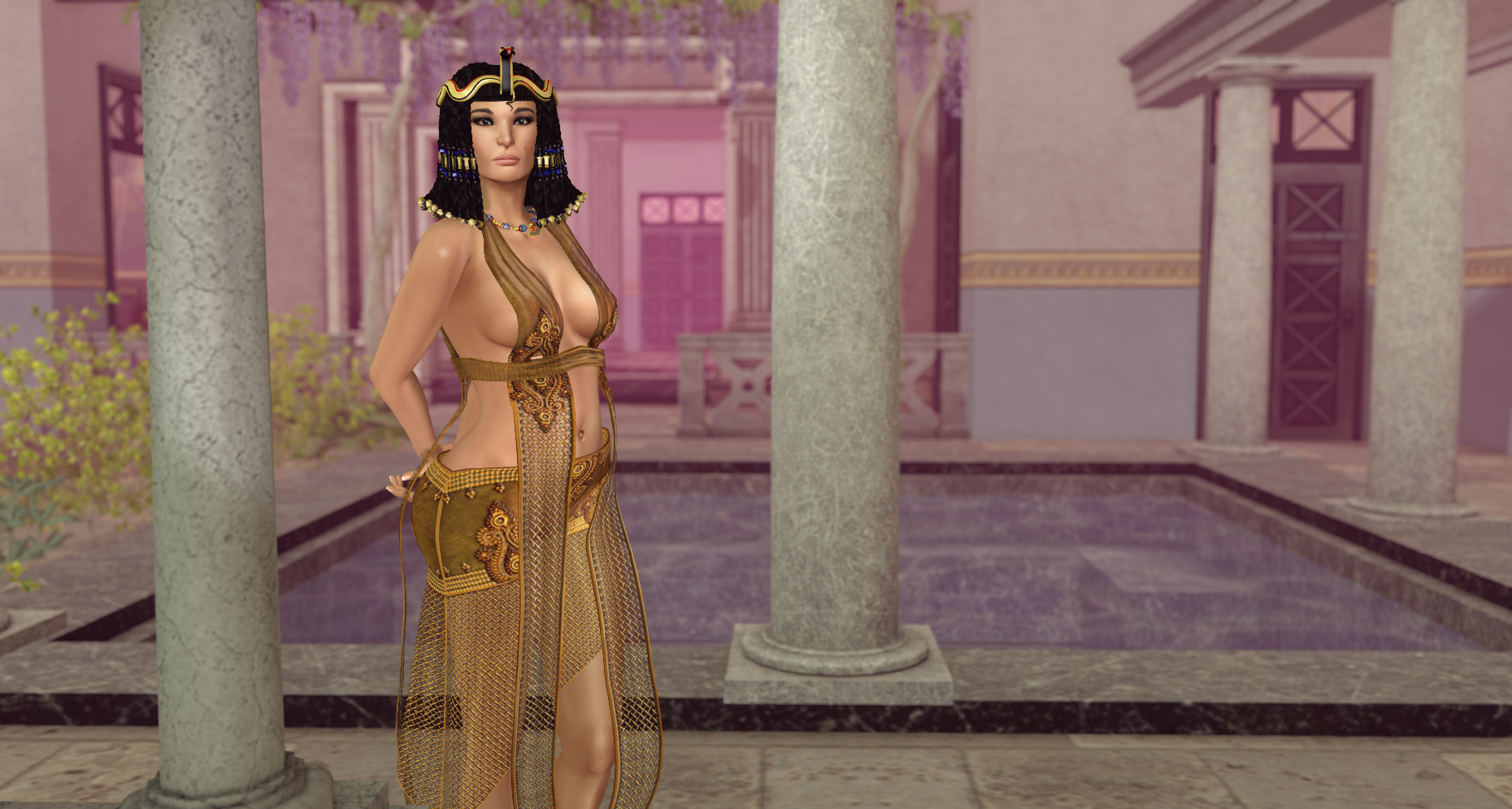 Until October 8th you can visit the Ice and Fire event to pick up, among other things, the Sunspear seating set from Del-ka Aedilis. The set includes a couch, a rug, a side table and a tea table, all with coordinating textures with a clear arabic/moorish inspiration and a colour palette that will remind you of a desert. I arranged the set in the Desert Villa from Lore and picked a sunset EEP setting, perfect for an invitation to evening tea…and perhaps more.

The Samira outfit from deviousMind is a little too Thousand and One Nights for Dorne, but it is certainly very lovely. Very appropriate for the Dornish theme, on the other hand, is the Serpent Choker from Schadenfreude, so simple and elegant. You can find it at the Fallen Gods Inc 14th Anniversary Market. If snakes are your thing, you will find a lot more cool stuff at the market! 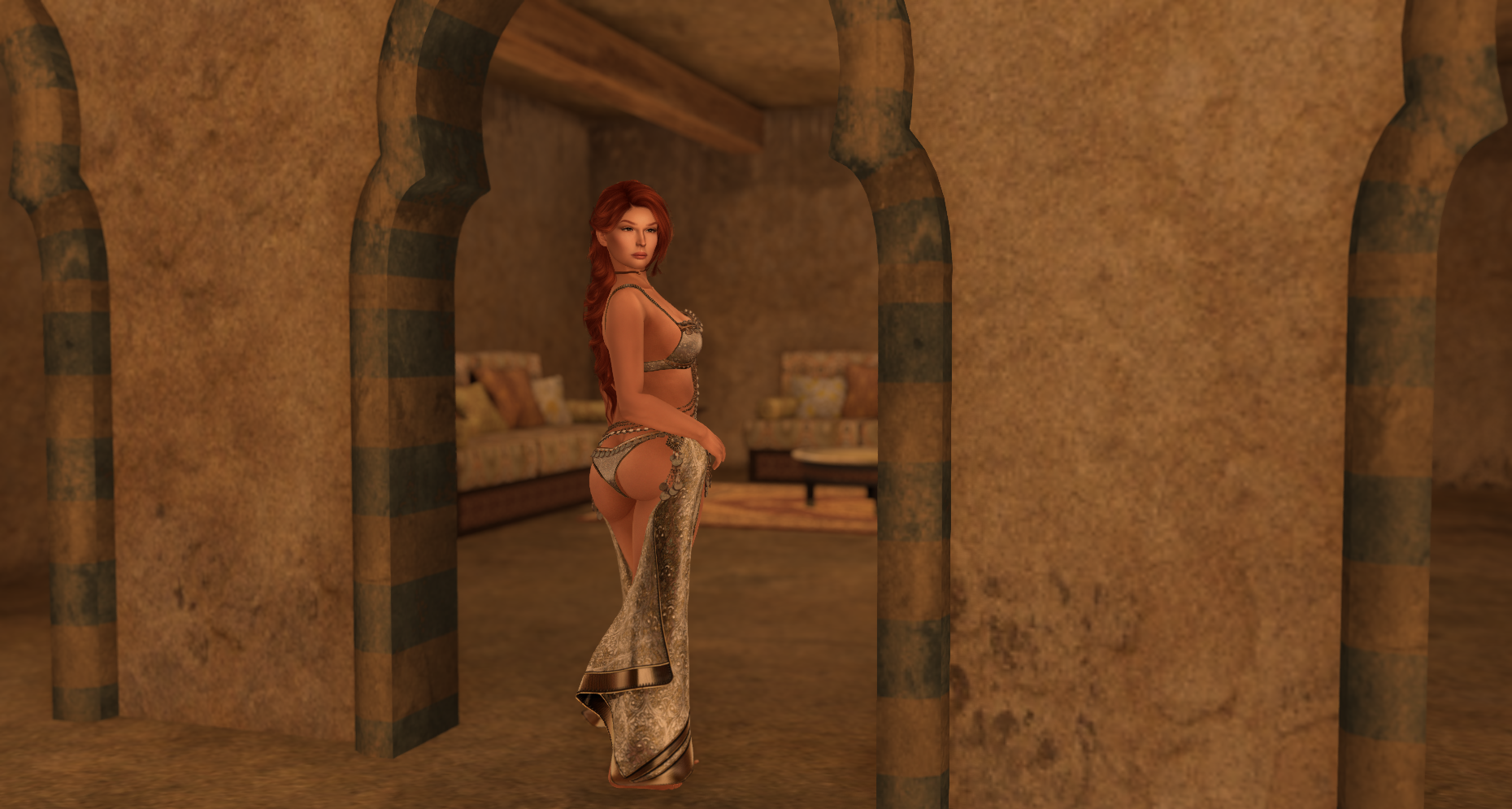 One evening, a young lord walked through the gates, leading instead of riding a fine horse, with ribbons tied in its mane and tail. He went up to one of the elegant townhouses and knocked on the door. After a while, a servant opened the door and the lordling gave him a letter. Then, he retired to the nearby fountain to let his horse have a drink while he waited for a response. 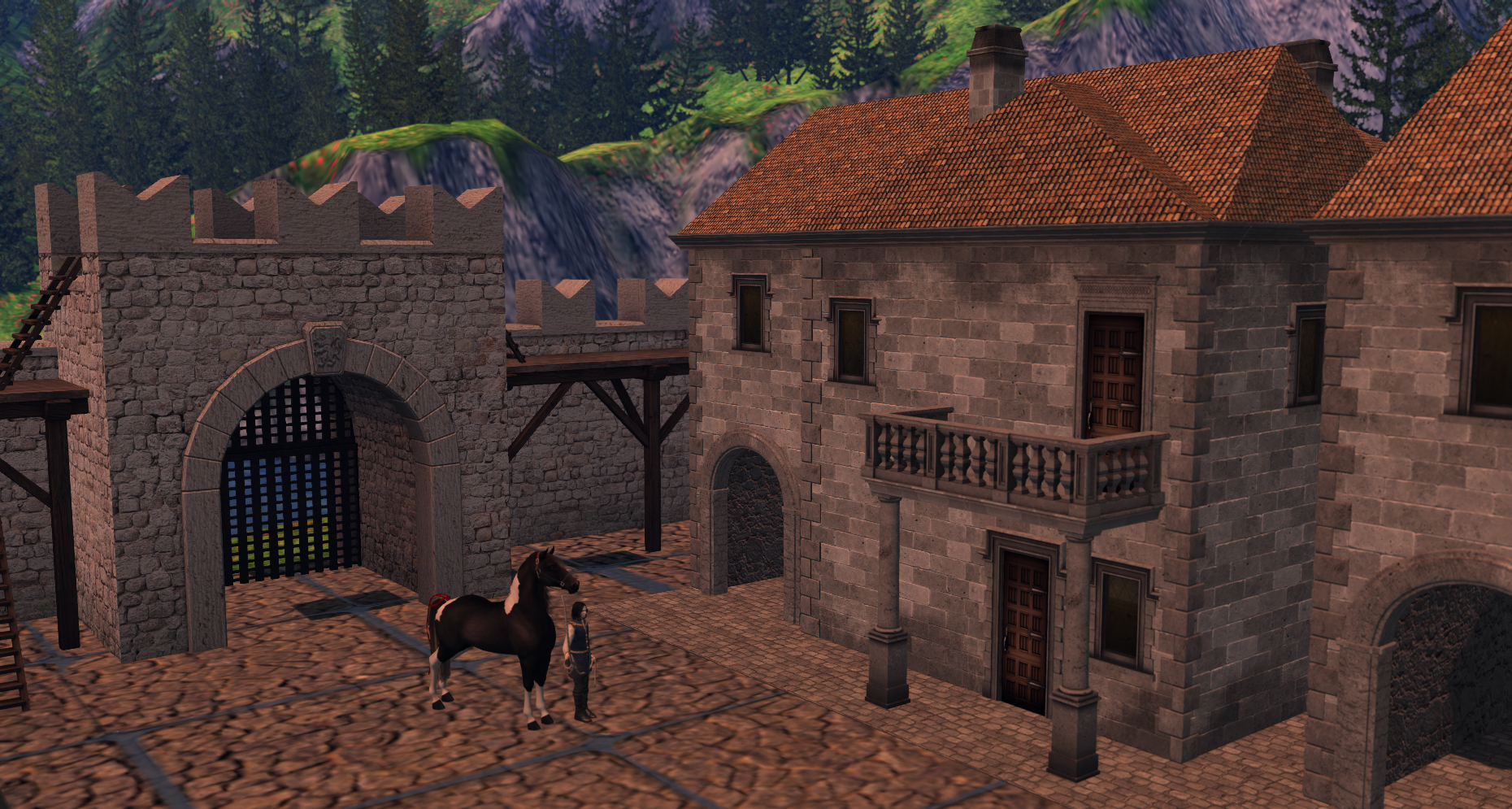 Welcome to the Roman Bath from the Civitas Series by Del-ka Aedilis. Classic and elegant, it a perfect addition to a roleplay sim needing a public bath house. The two tritons bearing braziers at the front are not part of the build but a separate release from Fantavatar & Moonstruck, but I thought they fit really well in thematically and they also show how you can add more of a fantasy touch to the setup. The Tritons include left and right versions and here I have sized them down considerably; at their original size they would make great centrepieces for a temple or similar setup.

The basket with bath supplies is also from Del-ka Aedilis and can either be worn or rezzed out as a decor item. Here, the bath slave (dressed in clothing from On a Lark) is holding it to welcome visitors to the bath. I also want to mention the skin because this is a brand new release from alaskametro for the Spoonful of Sugar Festival, benefiting Doctors Without Borders. Estrella is a 100% donation item and is available in five tones for LeLutka Evo X. 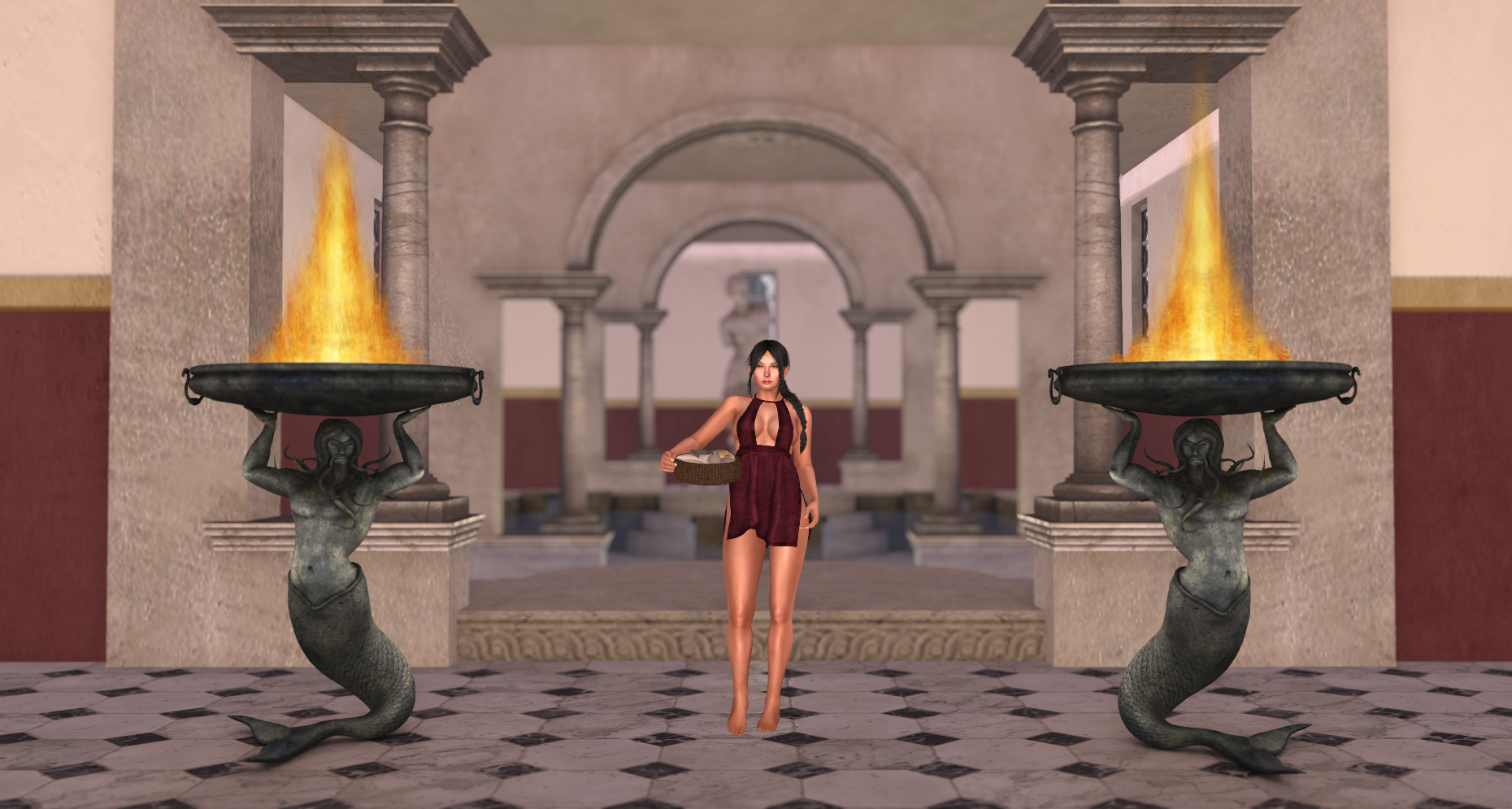 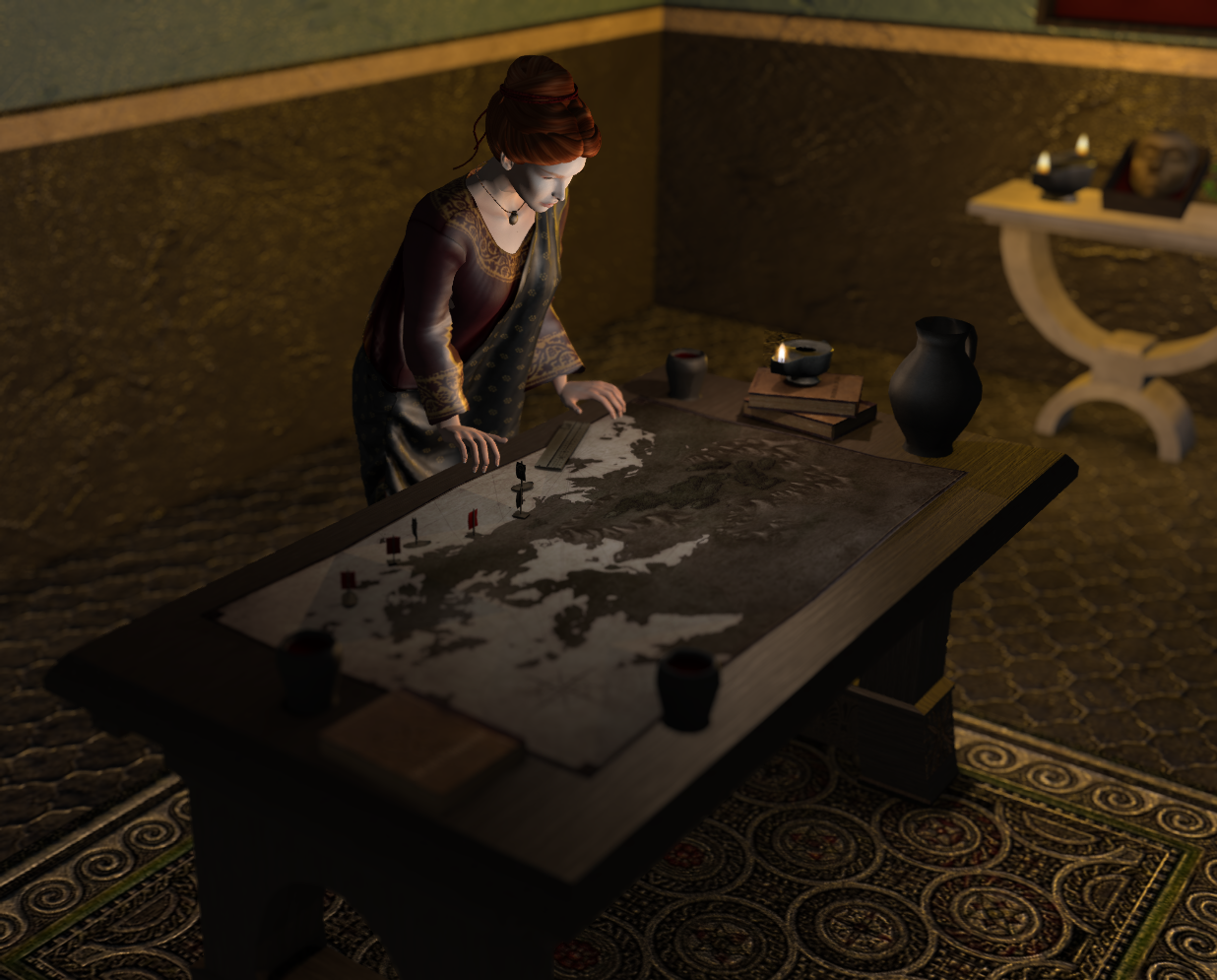 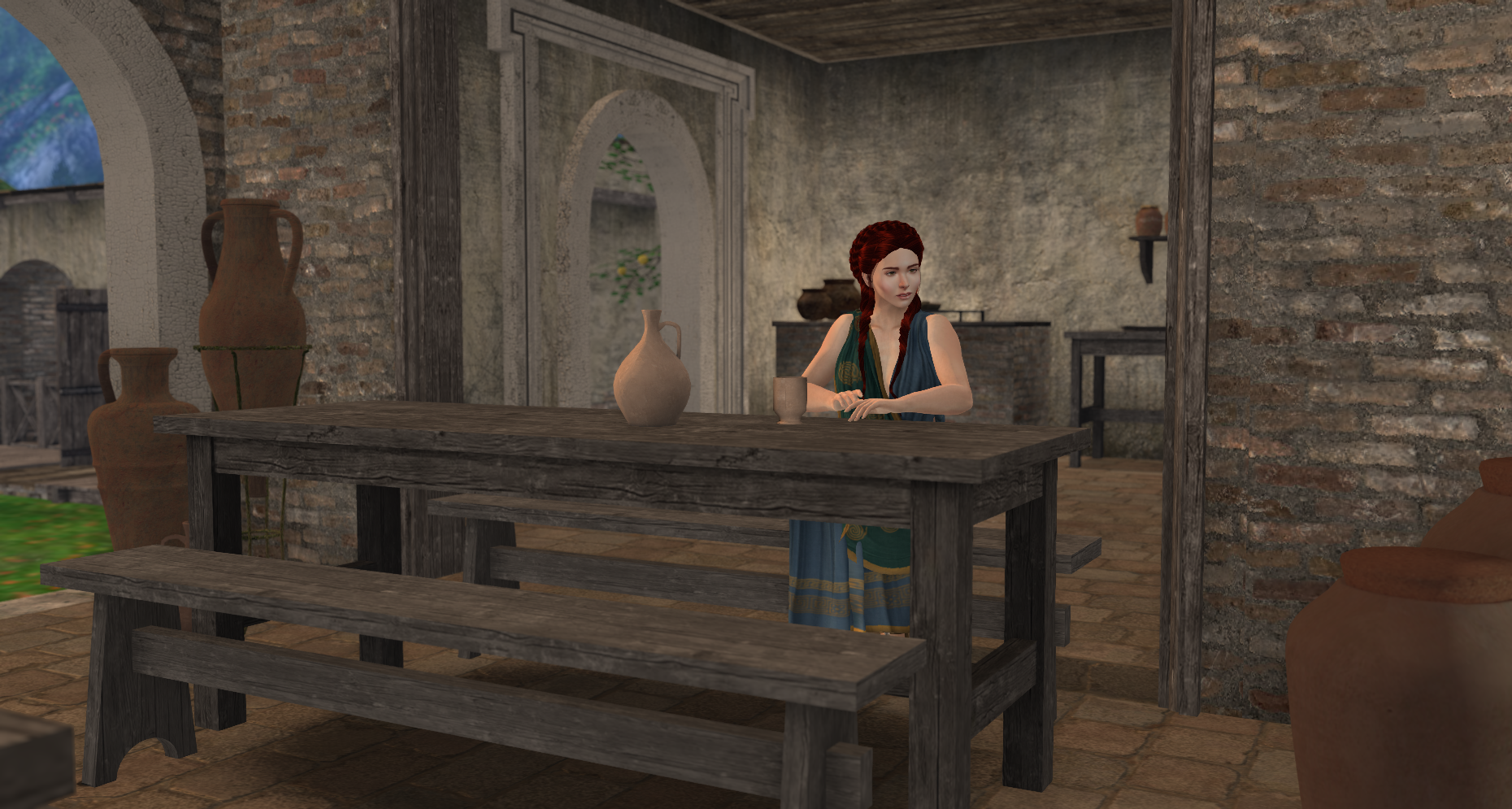 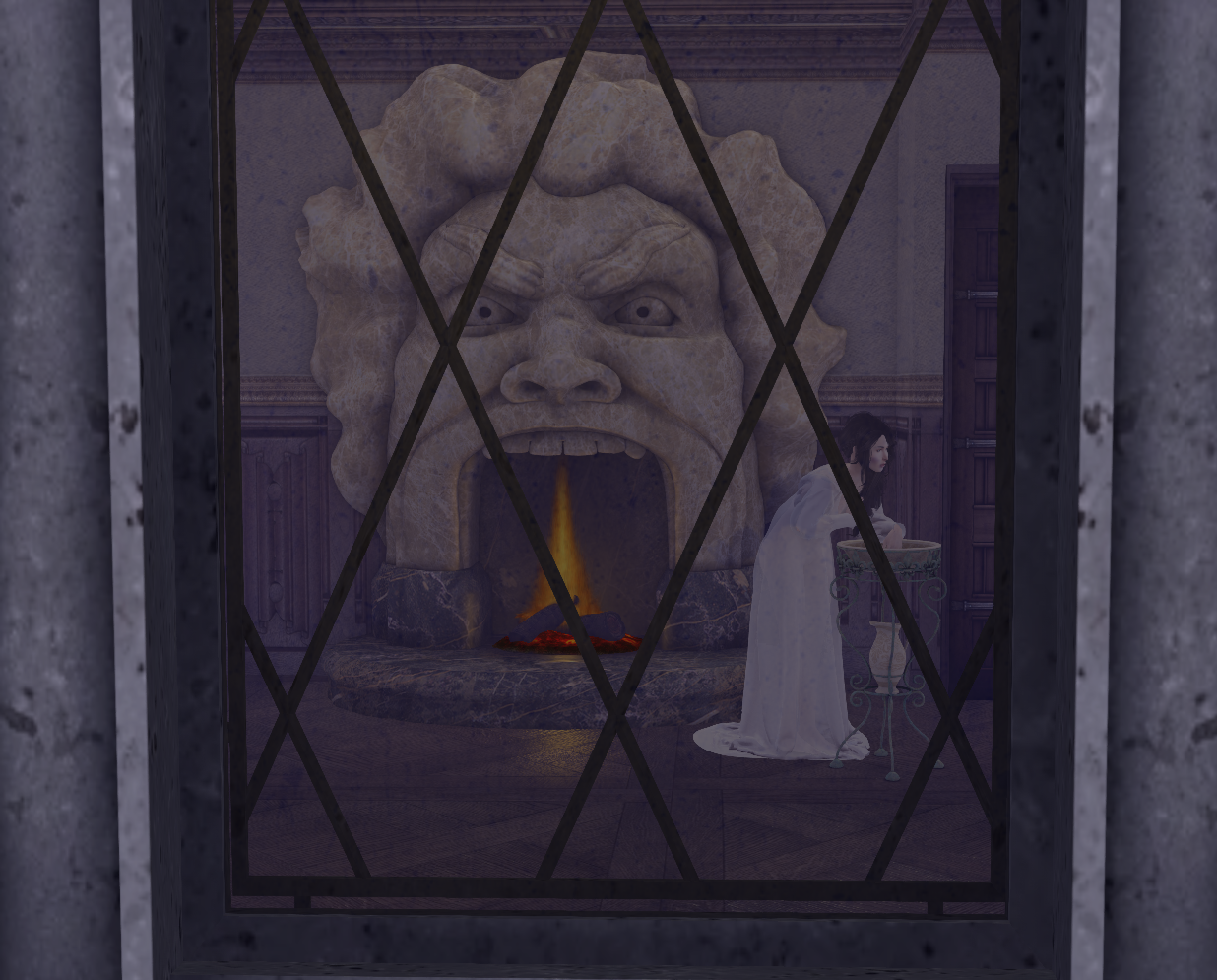 A new round of Redeux is opening today and running from June 14th to June 20th. Remember the full Laketown build from Del-ka Aedilis that I showed off a few weeks ago? Now they are starting to release the individual builds from this set and the first one out is the Laketown Tavern and Inn. Available together with it at the event is the Tavern Table Set and the Medieval Dishes Rezzer and all three releases are at 25% off for the duration of this round.

Also shown in this post is the Sam hair from Wasabi, a unisex style that can be worn with and without a cap and that is available at the current round of Anthem. 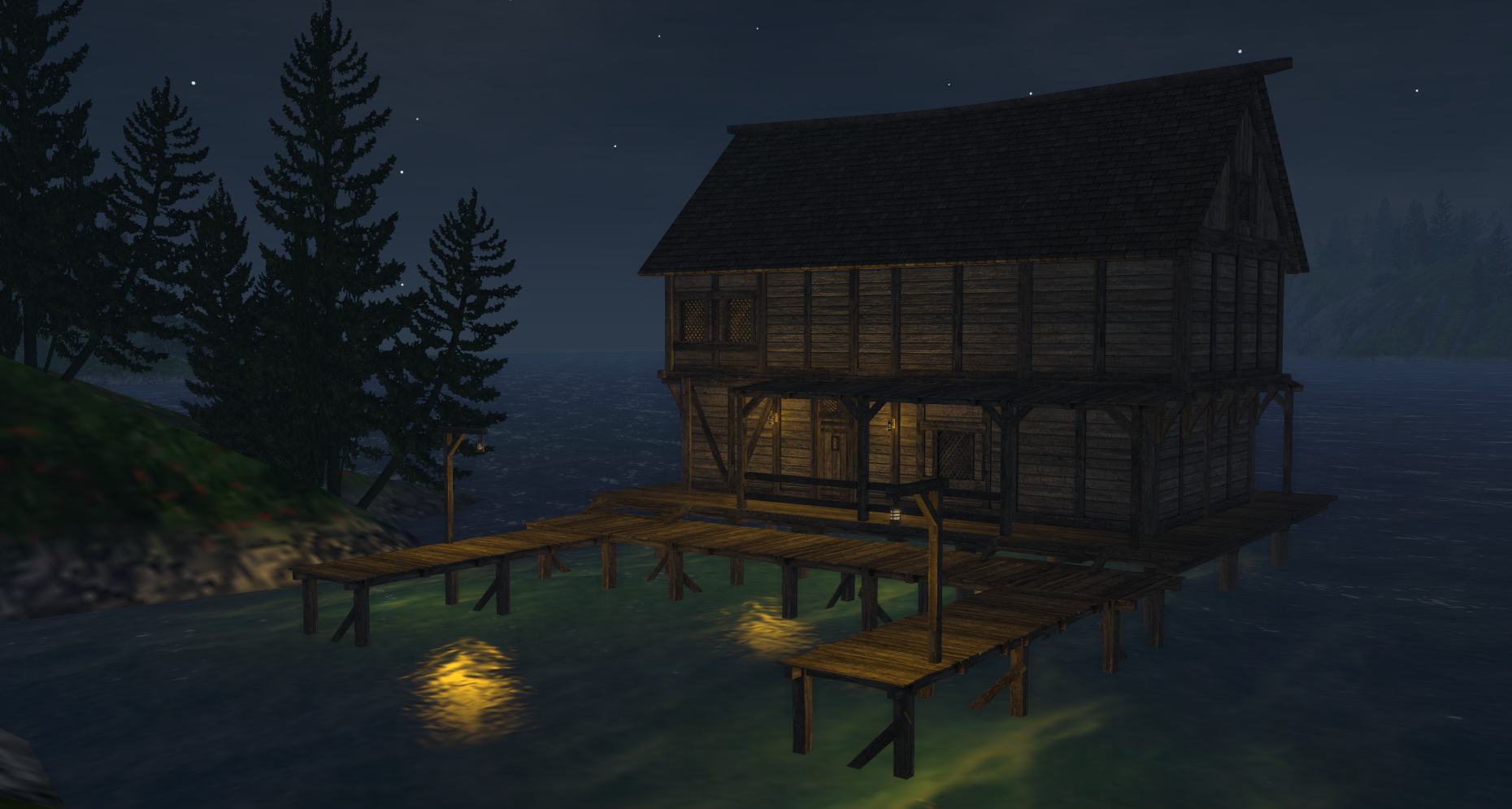 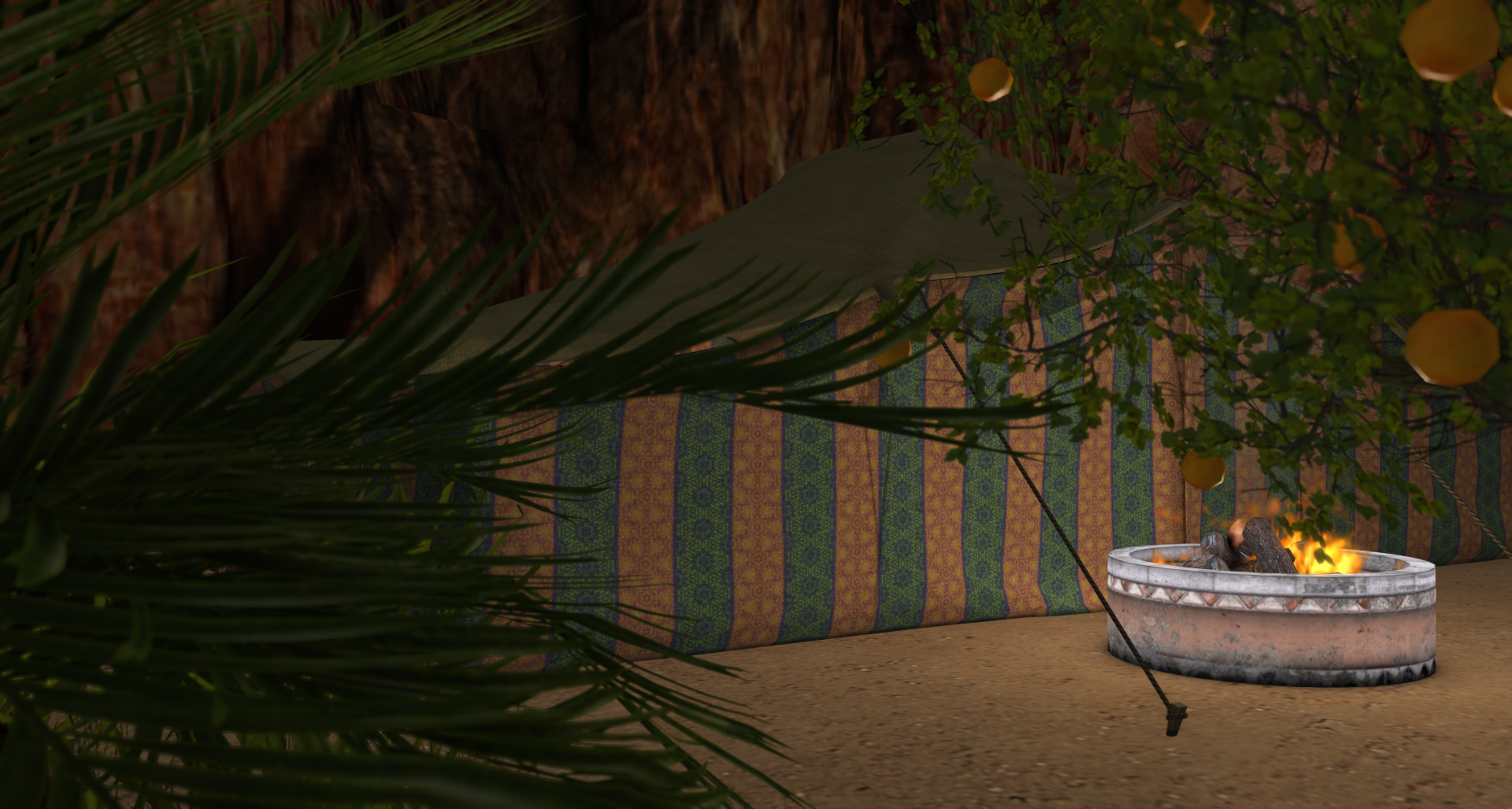