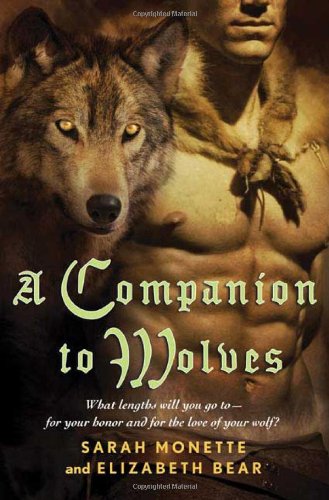 A Companion to Wolves, a collaboration between Sarah Monette and Elizabeth Bear, is set in a harsh, northern land were men bonded to huge wolves defend their lands and their wolfless kin from great trolls and wyverns. But the wolfbrothers are not well regarded by the wolfless, not the least because the bonding between man and wolf is so close that when the wolves mate, so do the men—with each other. Njall, a jarl’s son, is chosen as tithe to the wolfbrothers, but his father resents him for going and Njall himself is anything but certain about his choice. At first, his sense of honour is what keeps him at the wolfheall. Then, as Viradechtis is born, love for his wolfsister becomes the force that holds his new life together and helps him cope with the demands of his new position. And at the same time, the threat from the trolls worsens, escalating into a conflict that seems set to lead to the destruction of one side or the other.

Before I started on the book, I considered for a while if books that set out to comment on other books should be approached in a particular way. Is it best to be aware of the stated purpose of the book? Is it best to have read the books being commented on? In most cases, it seems like either of these circumstances would make a difference to how one perceives the book. I know, for example, that Jacquline Carey’s The Sundering duology was poorly received by some people who did not know that it was a purposeful rewrite of the basic ideas in Tolkien and simply took it for a badly disguised rip-off.

In this case, I have to say that it didn’t matter much what I knew when I started the book, because the pleasure of the reading experience took over entirely. The writing flows very well and the pacing of the book is just right, so it did not take me long to be entirely caught up in Njall’s/Isolfr’s life together with the wolves and the wolfbrothers. From time to time, I did make a mental note of things that in some way paralleled or reworked elements from Pern, but those mental notes became fewer and fewer the further I read. And on the whole, that is how I prefer it. I don’t mind books that make me think (Guy Gavriel Kay wouldn’t be my favourite author if that was the case), but I read for pleasure first and foremost, so I prefer it if the thoughts provoked aren’t prodded to rise beyond simmering at the back of my head.

Note: After reading a brief response to this review by Elizabeth Bear, as well as some comments about the book on her website, I have reworked this latter half of the review somewhat.

Since finishing the book, I’ve discussed it extensively with Elio as well as on the board. Both Elio and I are in agreement that its a great story and a very good take on the animal companion concept in fantasy. However, we had (from reading some comments by the author) been left with the impression that their intent was to some degree to shock readers, and we did not feel that the story was all that provocative or subversive. Now, I agree that we probably misinterpreted their comments to some degree, though it remains true for us that we see the book mainly as doing the animal companion story very well compared to certain other attempts, and so we see the improvement and not the deconstruction as its strongest point. Our discussions on the matter did lead to an agreement on the fact that by, for example, having a male protagonist in a role where most readers would expect a female can make you consider the scenario more carefully than if the cliché was presented with the standard ingredients. So, in that sense, playing with reader expectations can be an effective tool for provoking thought and deconstructing the story to the smaller components by making the reader take notice of these.

Of course, this is probably most effective when readers are shocked to find that their expectations are not met or when something for them quite discomforting happens. In this case, neither I nor Elio were shocked. We found it interesting, not the least since it introduced complexities not found in all animal companion stories (but we would both argue that there are some other very good such stories out there, so we don’t feel it is a genre that is particularly poorly represented), but initially we were left thinking that our reactions were far from what the writers seemed to have expected. Yes, parts of the story could be called uncomfortable in that they did not flinch from dealing with the harsh realities of the man-wolf bond, but they were not uncomfortable in the sense that we thought ‘this is so wrong’. The reality they portrayed was harsh, but it was the reality of the setting, and we accepted it.

None of this, however, is a problem with the story. If we had been unaware of any of the discussions surrounding the book, we would simply have said ‘wow’ and then this review would have focused entirely on how compelling the story is, with its interesting setting (you don’t get a lot of good fantasy in a Norse setting, so that’s another big plus for it), strong characters and realistic ideas for how an animal companion bond could work out given these circumstances.

Posted at 02:07 CET by Linda
Books
< Previous | Index | Next >
Commenting is not available in this channel entry.
Otherworldly