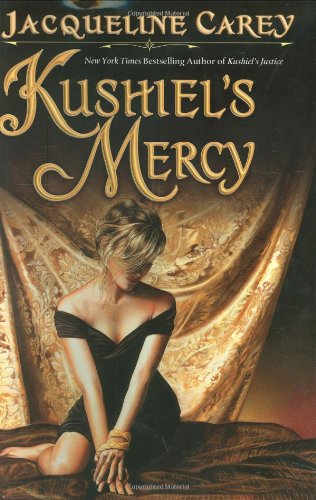 Apparently, I am still starved from my long bout of very little reading, because yesterday another book found itself devoured at a rather alarming pace. Of course, Kushiel’s Mercy is admittedly not the first Jacqueline Carey book that I have finished in a day, and as I was feeling a bit down yesterday it proved an excellent way of drowning my sorrows. In short, it didn’t stand a snowball’s chance in hell of lasting longer than a day.

Picking up almost right on the heels of Kushiel’s Justice, which saw Imriel returning from his quest to slay his Alban wife Dorelei’s killer, Imriel and Sidonie are now determined to no longer defy Blessed Eleu’s edict of “Love as thou wilt”. Choosing sense over love has caused them grief and caused the deaths of not just Dorelei and with her Imriel’s unborn son. But Sidonie’s mother, Queen Ysandre, is not about to give them her blessing. Too many still remember the pain caused by the treacherous actions of Imriel’s infamous mother, Melisande Shahrizai, and unless Imriel can find her and bring her to justice the queen will not allow him to become Sidonie’s consort. At least not if Sidonie is to remain the heir.

At the start of the book, one is lead to believe that a quest for Melisande will be at the core of the book. But Carey wisely avoids hinging everything on a single plot thread, especially one that has been central to previous books. Instead, the core of the plot takes a very shocking turn of events with the arrival of a Carthagenian embassy. Carthage dreams of restoring its empire and has its eye on Aragonia, long-time ally of Terre d’Ange. Why they would wish to offer Queen Ysandre a tribute is unclear, though their arrival is preceded by a coded message from a member of the Unseen Guild that suggests that information about Melisande will be given to them if the tribute is accepted. The tribute, however, turns out to be something entirely unexpected, and it throws Imriel’s world upside down. He is indeed forced to go on another quest, but one very different from the one he had expected to undertake.

Structurally, I found the book to be well-constructed, especially in regards to the pacing, though some readers may find elements of it predictable as it does share certain characteristics with the previous books in the series. Personally, I quite like this, and I my impression has always been that there are purposeful structural parallels between each book, especially between the corresponding books of each trilogy. All of the books tend to feature a distinct opening phase, followed by a well-paced race towards the conclusion of the dominant action-oriented storyline, which in turn is followed by the need to resolve a final, often less action-oriented but sometimes more emotionally difficult problem, before a few final, reflective chapters concludes the book.

In terms of parallells between the concluding books of the two series, there are definitely both structural and thematic echoes of Kushiel’s Avatar in Kushiel’s Mercy. In the former, the search for the Name of God to free Hyacinthe initially appears to be the focus of the story, but in the end it turns out to be something that leads into another storyline. However, it is also the conclusion of that storyline that allows the Name of God to eventually be found. Similarly, in the latter, the objective appears to be to bring Melisande to justice, but the search for her ends up leading to another, quite unexpected storyline, which nevertheless has a distinct connection to the quest for Melisande. The books also share some of the sense of doom that Carey manages to build up as one realizes the magnitude of what has happened and there are also some parallels between Phèdre’s and Sidonie’s fates in the two books, though it should be noted that in no way is Kushiel’s Mercy as dark as Kushiel’s Avatar was.

All in all, Kushiel’s Mercy is a very good conclusion to the second Kushiel trilogy, and overall I thoroughly enjoyed Imriel’s story. As a protagonist, he did not personally grip me quite as much as Phèdre, but I really liked the stories that Carey was able to tell with him as the point of view. It is rather bitter-sweet to be saying goodbye to all the characters introduced over the two series (although Carey will return to the setting with a new trilogy, it will take place some generations later), and I quite liked that the final chapter of the book feels very much as a fond farewell to old friends. Perhaps too sentimental and a little too perfect for some, but it suited me just fine. Those characters have earned themselves a bit of peace and quiet.

Posted at 23:29 CET by Linda
Books
< Previous | Index | Next >
Commenting is not available in this channel entry.
Otherworldly