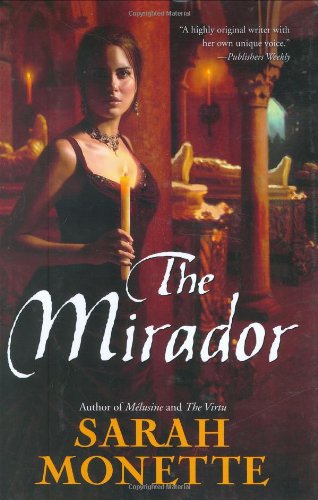 The Mirador picks up two years after the end of The Virtu, which concluded a major story arc for Felix and Mildmay (though not without leaving some interesting threads dangling). But while the two characters were more beset by trouble in the previous two volumes, it is in this volume that it really becomes apparent how damaged they are. In particular, Felix. While he was afflicted by the madness resulting from being used to break the Virtu, it was no surprise to see him going through some difficulties. Here, however, its made clear that his issues go so much deeper and that they won’t simply go away because Malkar is dead. Felix (and Mildmay, as a result of the events in The Virtu) remain haunted by him and by other ghosts from their pasts. This nicely parallels the fact that literal hauntings and literal ghosts figure prominently into the plot of the book.

A notable difference from the previous two books is the addition of a third narrator: Mehitabel. Her chapters are very enjoyable but I also think that she was a very necessary addition because she’s doing a lot of the acting (both on and off stage, as it happens) while Felix (in particular) and Mildmay are reacting and being preoccupied with their personal inner demons. Mehitabel’s difficulties are primarily external, though we do learn more about her character as well. The most development, however, I think comes from surprising directions as we get to see new sides of Stephen and Shannon which makes them both a lot more sympathetic.

The plot is built up slowly over the course of the book, with threads of events that originally appeared disconnected coming together. Possibly, they come together a little too neatly, though I think it may set the stage quite well for the final book by tying up those loose ends and providing a somewhat cleaner slate before preparing to tackle something else. I do, however, think that the strength of the book is in the characterization rather than the plot, and I also found that one of the main storylines for Mehitabel didn’t quite grab me as much as it perhaps should have. In fact, although I enjoyed her chapters a lot, I think that enjoyment mostly stemmed from her interactions with others rather than from me taking a great interest in what was happening to her personally (whereas, on the other hand, I remain very concerned about especially Felix but also Mildmay).

On the whole, though, I very much enjoyed The Mirador. It is a worthy follow-up to the previous two novels and it really has me looking forward to the final one.

Posted at 23:33 CET by Linda
Books
< Previous | Index | Next >
Commenting is not available in this channel entry.
Otherworldly