There’s a new man in town and he’s got quite a nice physique. A Slink Physique, even. Yes, indeed, Siddean Munro has finally released a male mesh body and it actually comes with some features that have yet to make it to the female Slink Physique body (though the release announcement promises that they will soon appear there as well). The body comes with a skin in several tones but there are already some options for appliers out there, such as the new Jake skin from Adam n Eve which I am using to show the body off in this post. Do note that this review contains full frontal nudity. 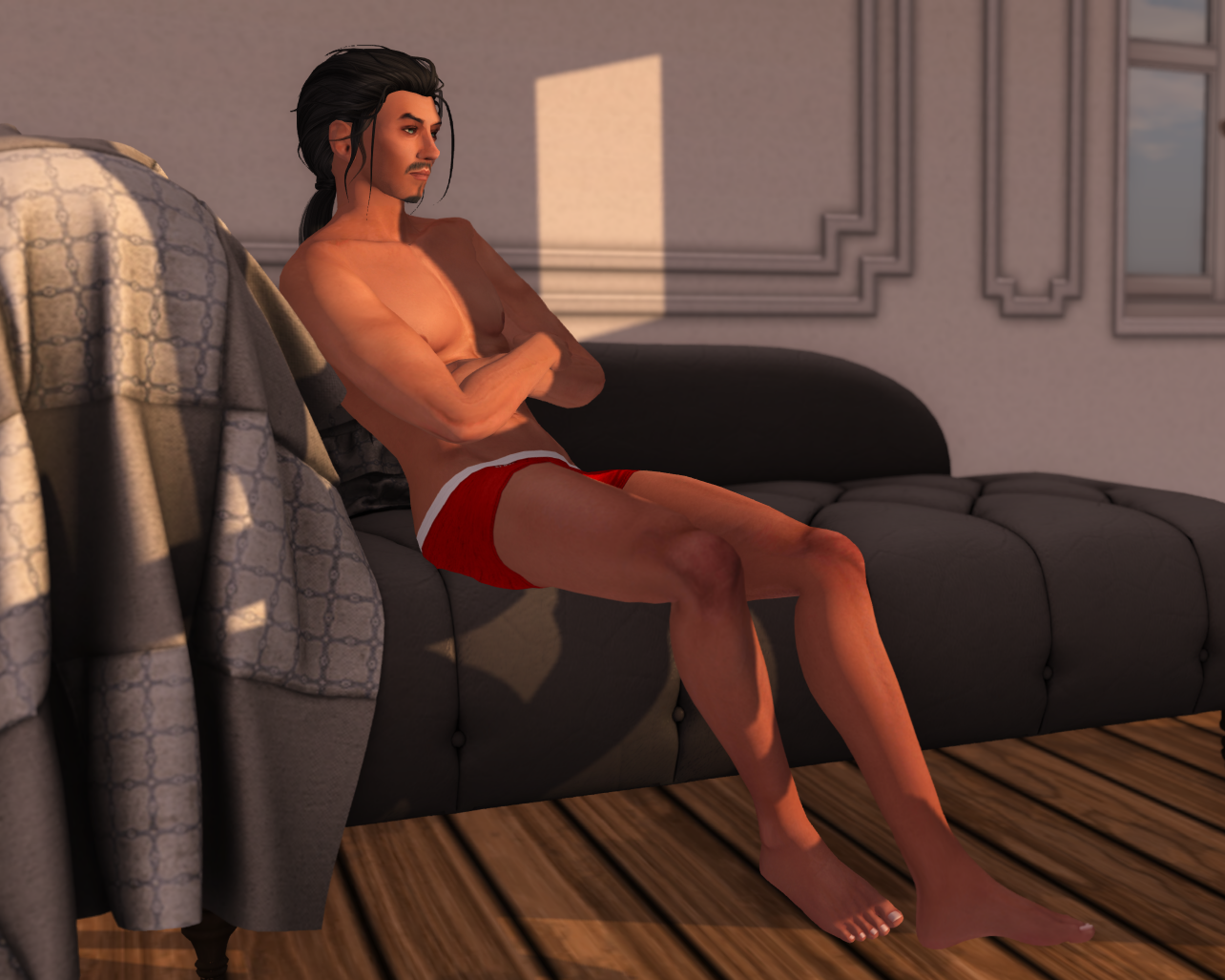 The Slink Physique male body is a nicely proportioned option for a male mesh body which stays relatively close to the overall shape of the SL avatar but of course improves on it. Gone are the lumps and bumps and awkward bends. If you are after a very muscular body, Physique isn’t it, but other than that I expect you can achieve most any look in combination with the right skin. You do come out a touch leaner than your SL avatar shape, so to achieve the same result with Physique, you might want to add on a bit of body fat and/or body width.

Included with the body, in addition to the default skins, are applier underwear in three colours as well as mesh underwear, a mesh tanktop and mesh jeans, all with excellent rigging and texturing. That should ensure you don’t have to be naked when you head out to shop for a new wardrobe, though you should also be able to wear existing mesh clothes with the help of the alpha options on the HUD. 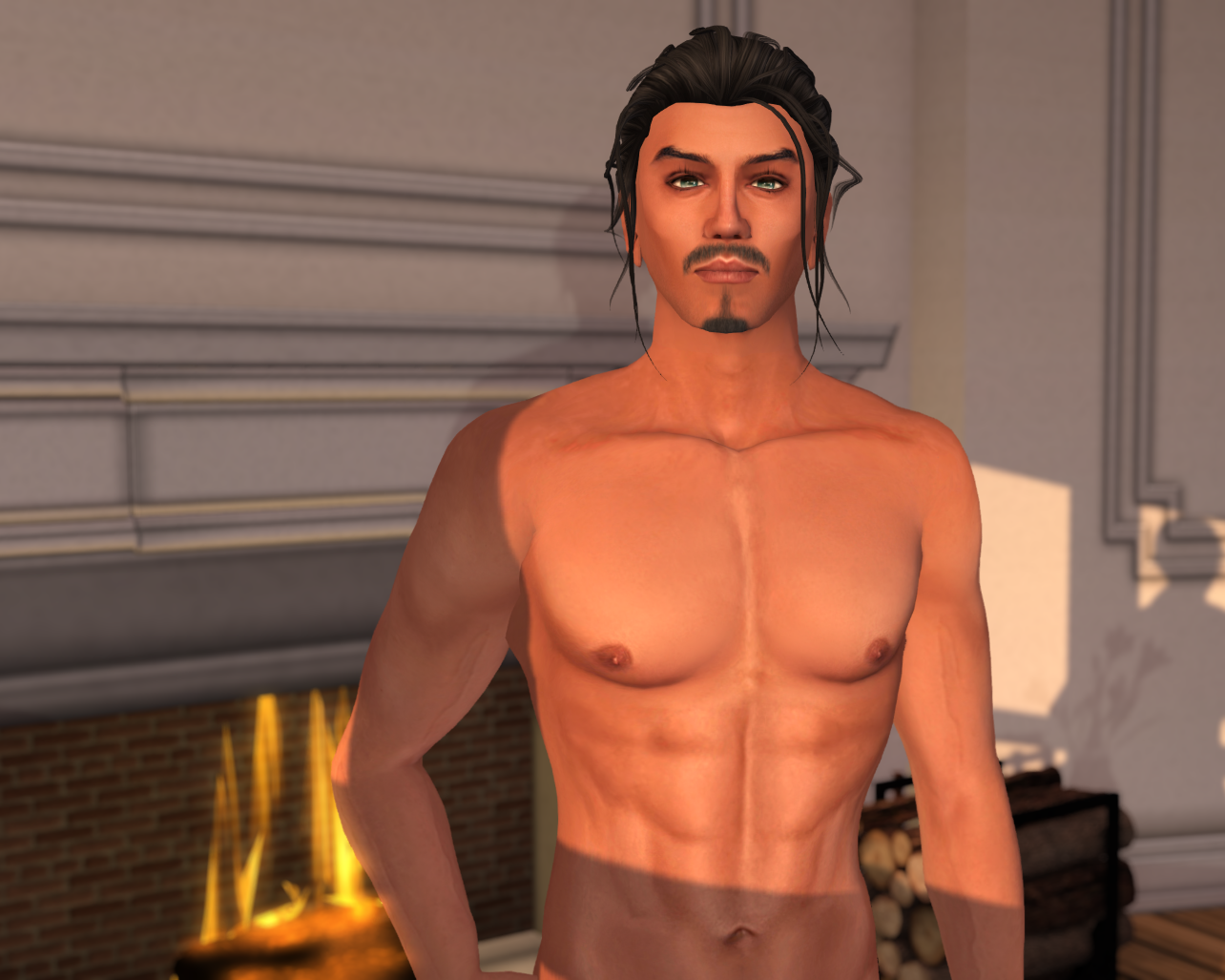 The skin I am wearing is, as I noted, not the default skin but instead a brand new release by Adam n Eve called Jake. Jake comes in five tones, including a very pale t1 and a very dark t4. This is the nicely tanned t3.

Jake also has a nicely detailed back (and backside) and the modelling of the mesh body looks very good from behind as well. This shot also gives a good look at the back of the Rogue hair from Exile. 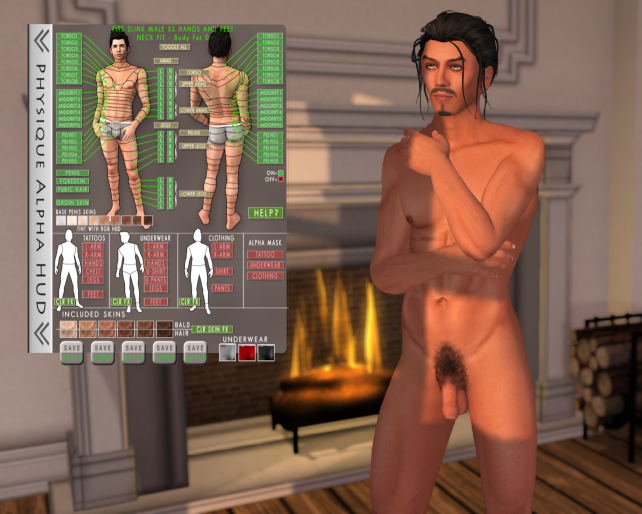 Finally, a look at the unclothed mesh body from the front and yes, it does come with a (flaccid) penis, which can be reskinned with appliers as any other part of the body.

In this shot you can also get a look at the HUD. If you have the female Physique body, it will all be familiar territory. If not, do note that there’s a good number of alpha options and they can be turned on and off individually or in groups, a very handy feature.

As for those features that the male body has over the female body, the male Physique ships with support for Omega appliers and with the option of tinting the body (using a separate HUD from the main one). If you are sitting on skins which do not get appliers, tinting of an existing skin may provide a solution to being able to wear a mesh body even with older skins.

At only L$1250, Slink Physique is a very competitively priced option for a full-featured male mesh body.