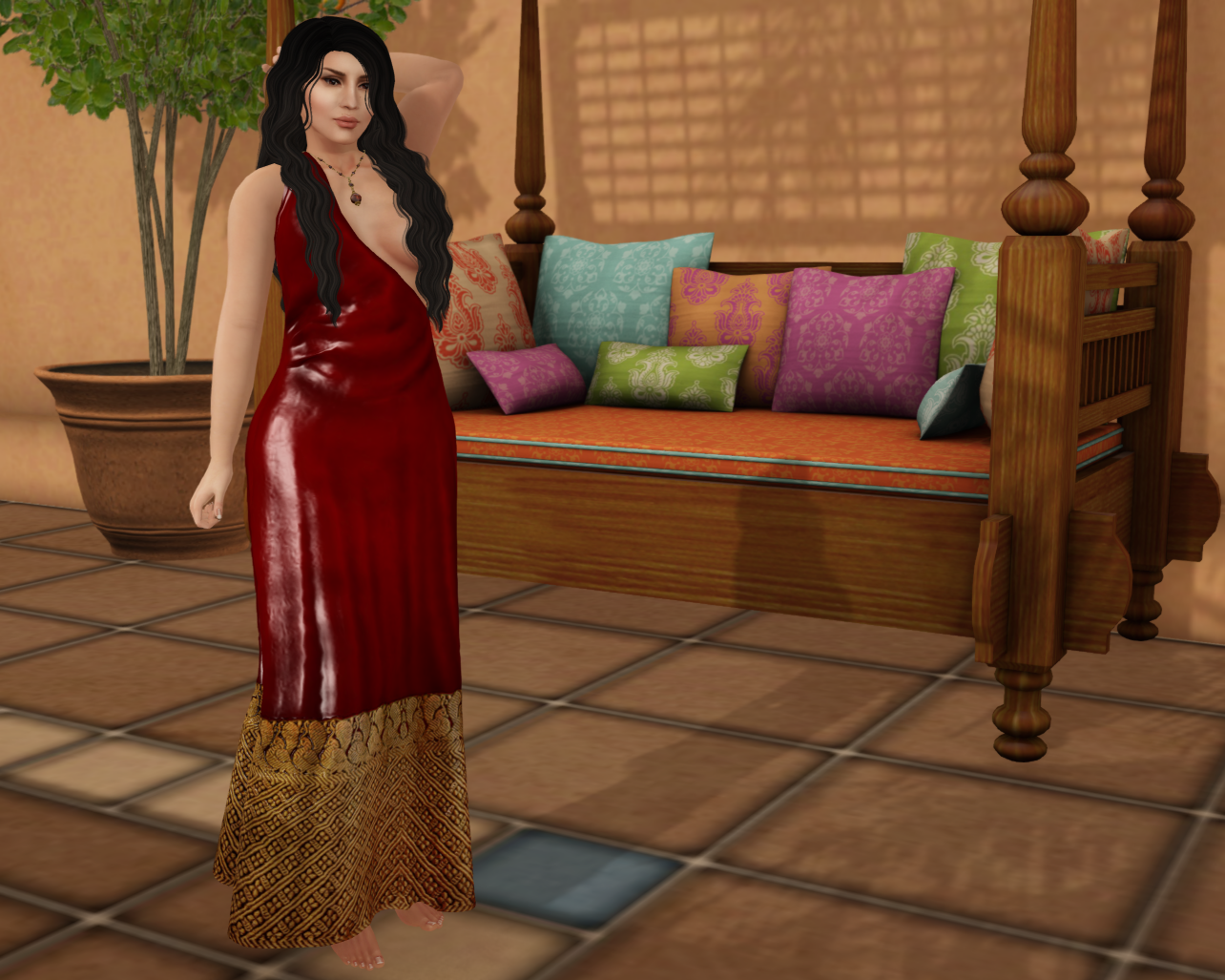 Lets start with the gown and get back to the skin after that. The lovely embroideries on the Burning Sand gown would certainly fit right into Dorne, though the baring of one breast is borrowed from Qartheen traditions. But for a private engagement with a lover, it might not be unthinkable in Dorne either, and that is the staging I am imagining here.

As with the other gowns in the Dorne collection, materials are enabled, so the look of the gown will depend quite a bit on whether you use that are not. 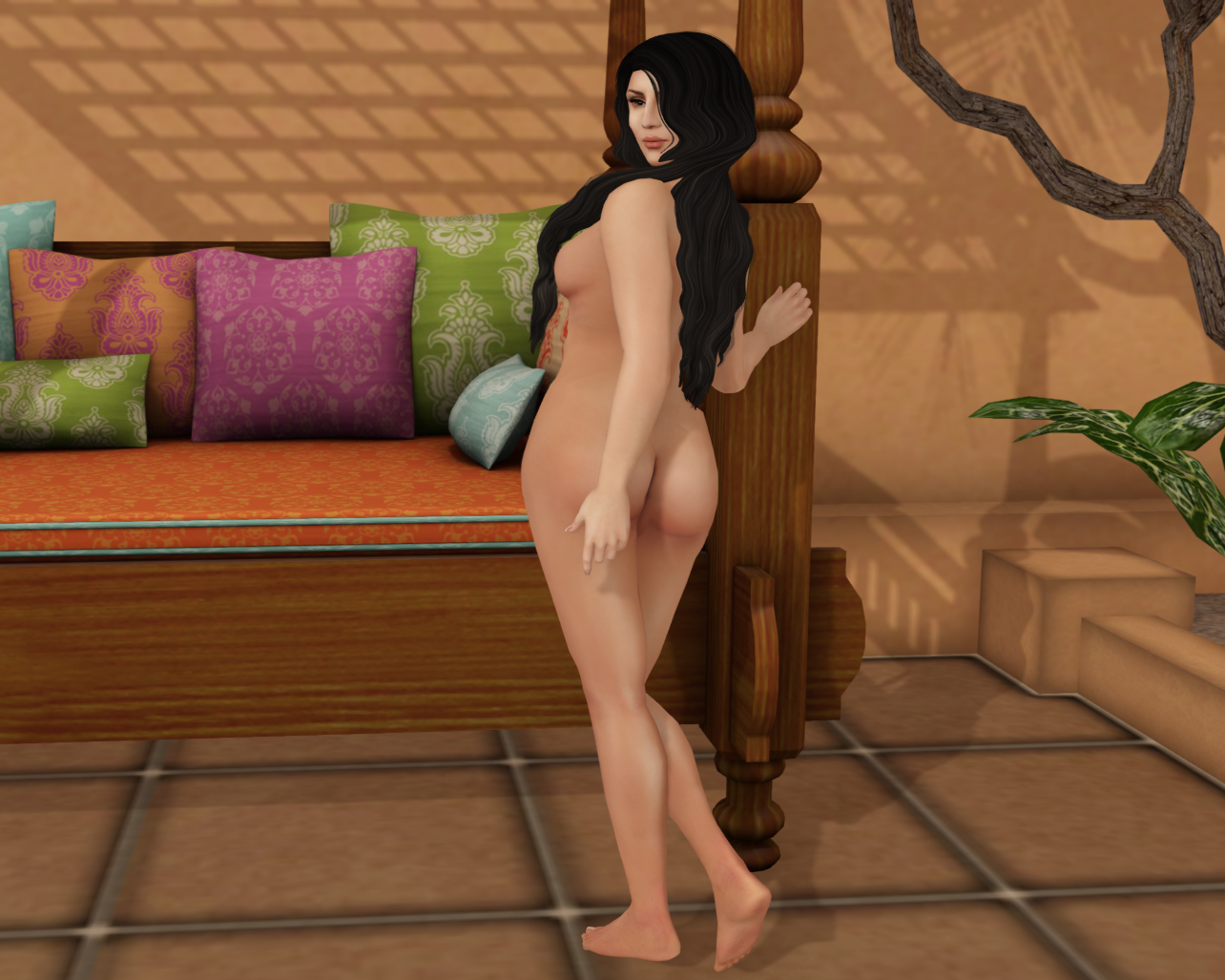 Now, onto Shirin.  She comes in four tones—Celtic, Nordic, Mixedtype and Mediterranean—and this is the Mixedtype. I really liked the Celtic as well (may have to go back and pick it up) since it is a well-done pale tone and while Mediterranean seems rather dark for its name, it is a nicely balanced darker tone.

Each skin includes five brow colours, one thicker dark brow and one skin with no brows, which is always very handy to have. You also get 5 lip tattoos of different brightness and one eyeshadow—all tintable. I will get back to this as I look at the face.

The skin purchase does not, however, include any appliers, those are all purchased separately which can add up a bit. Then again, you can use them with any DeeTaleZ skin in the same tone. The one thing I found myself lacking was cleavage options; since I don’t use mesh breasts, I do like having tattoo layer options for both push-up cleavage and smaller breasts. 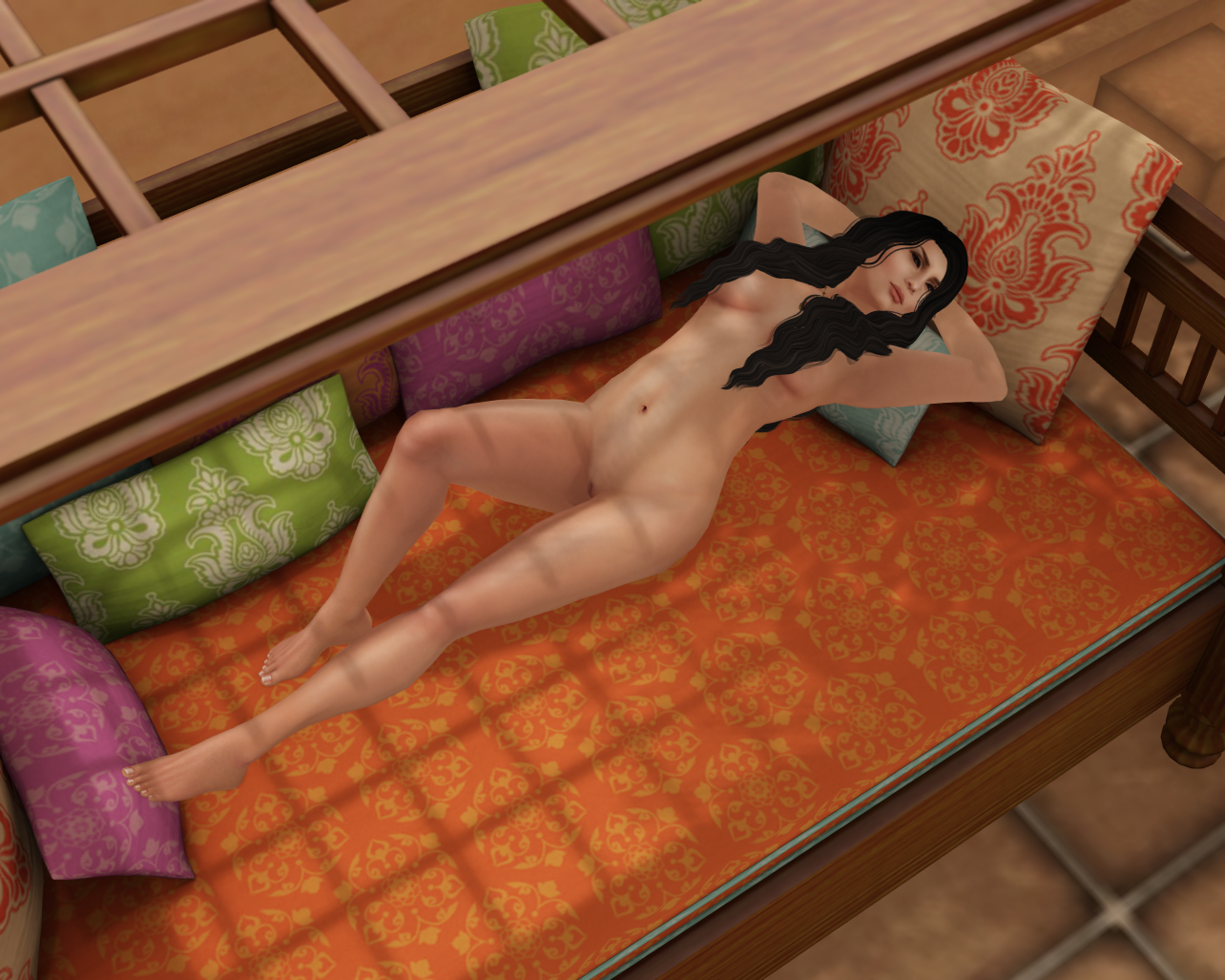 Overall, I think the body is quite nice with a good level of detail and shading. The breasts look quite natural and do work well for smaller breast sizes too, even if even lighter shading wouldn’t have hurt for that. The bottom, another key area for me, is nicely rounded and not too small-looking.

I have a few small quibbles, such as the gradual lightening of the skin tone from the feet and upwards. A lot of skins in Second Life do have a tendency to have a somewhat darker lower body, but I found that in this case it was perhaps a notch to pronounced as I zoomed in and out to get a sense of the overall look of the skin. My other little quibble would be that the arms could use a touch more detail—the crease at the elbow stands out a bit much amidst fairly smooth surroundings. 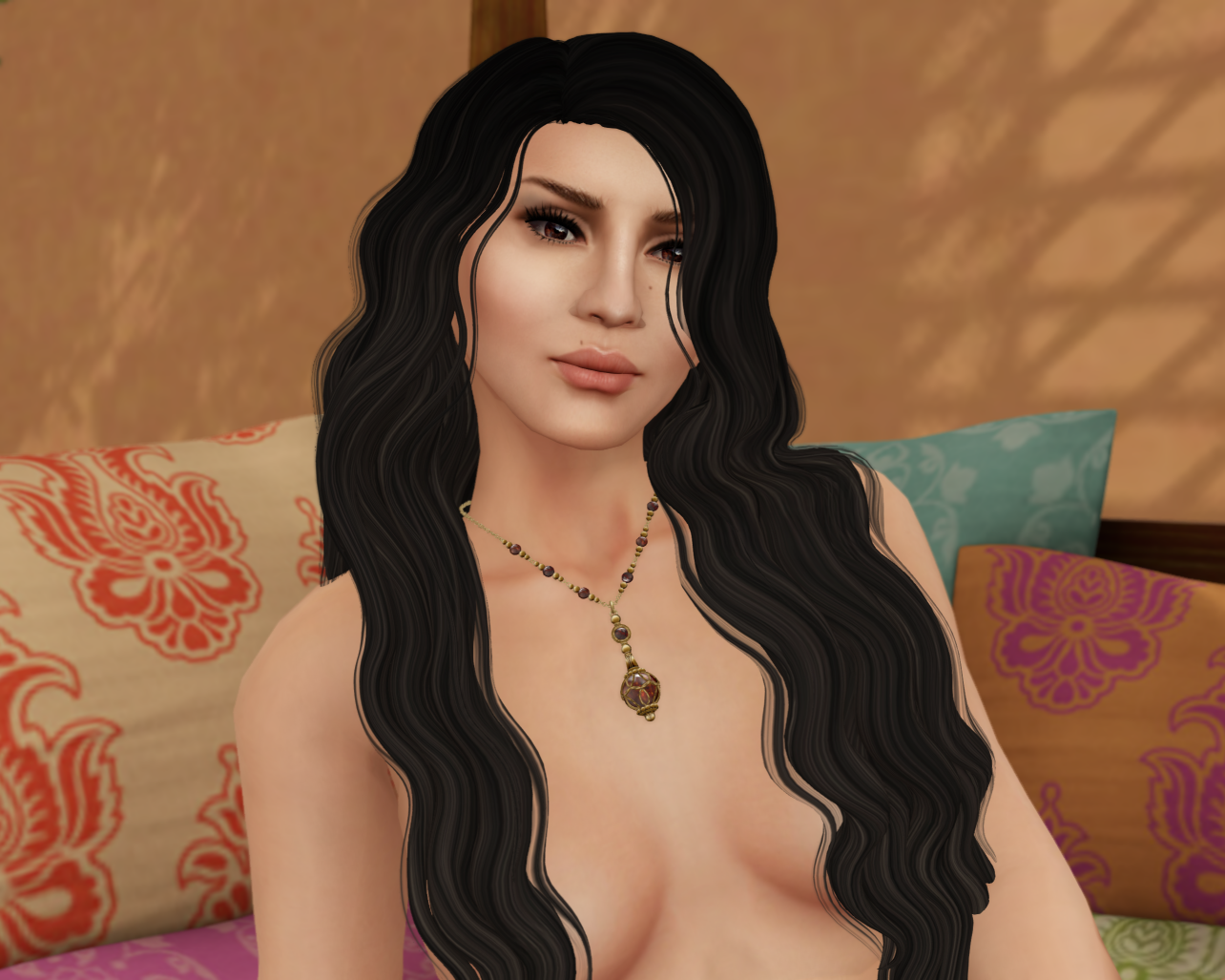 I have no quibbles at all with the face, however. I really Shirin’s features, especially the shading of the nose and the cheeks and also the shape of the lips, which don’t have to be absolutely massive to work well. And the moles are a great touch which make the face so interesting and so distinctive. I also think the eye-shape is very pretty. I should note the face comes in two versions, where the difference is in the lips—this is Lips2.

I did say I would get back to the included makeups and the fact that they are tintable. In this case, I’ve tinted the lipstick quite subtly, almost like a darker natural lip, and the eyeshadow is a dark grey. I actually did not realise they had made tattoo layers tintable (I believe they weren’t when they were initially released, but I could be wrong) and I am surprised there’s not more makeup taking advantage of this. Maybe not stand-alone makeup, since its such a low profit-margin anyway, but for tattoo layers included with a skin it really makes sense.

So, there you have it. I will definitely be keeping an eye on the new releases from DeeTaleZ from now on and I hope you will too.

Other items used in this post were Hair 30 from Eaters Coma, the Genie necklace from Earthstones, eyes form Mayfly, the Kanpur cCuch from Trompe Loeil and the Marrakesh Oasis house from Barnesworth Anubis.