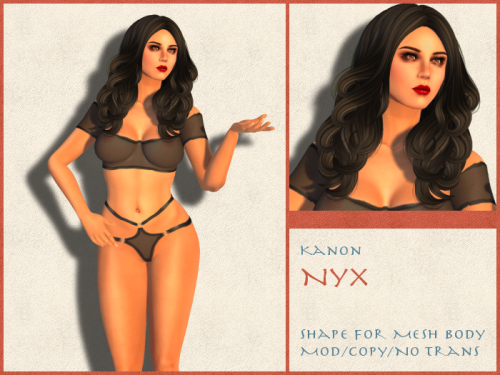 Roawenwood’s latest release is not for the timid, as the somewhat NSFW name (see credits!) would suggest. There are plenty of couple poses (even some threesome poses) and they’re all rather forceful. The fact that this is an outdoor scene as well made me think of Greek nymphs fleeing amourous gods in the woodlands, and that’s where we ended up with this setup, even though the Mara outfit from Adam n Eve has more of a Gorean than Grecian feel to it. I am also wearing Wasabi’s latest hair, Pickle, which gave me the title for the post. Finally, I have another new alaskametro skin, this one is called Yazmin and is available at the Spoonful of Sugar Festival benefiting Doctors Without Borders. It is time to appreciate the small things in life again with the second round the Itty Bitty Titty Committee. I slipped on my Petite Chest Augment for Slink Physique, my favourite body and favourite petite option, and tried out the latest release from Adam n Eve. This cosy tank & shortie combination is an exclusive for the event and in addition to supporting both Slink bodies with and without Petite it supports Legacy & Legacy Perky and Maitreya Lara, Lara Petite & Lara Flat. The hair is one of two styles from Wasabi at the current round of the Arcade gacha and the bathroom is aboard Dutchie’s New Amsterdam houseboat, furnished entirely with Dutchie furnishings. Last month, I featured Dutchie’s Red Brick Café. At the August round of FaMESHed, the café was joined by two more classic red brick buildings, one intended as a store and one as a residential building. Each (including the café) also received a terrace and a version without side windows, so that you can put them close together.

I took on the challenge of showing these buildings off and built a little mini-quarter with them, with the residential building in the middle and the café and the store flanking it. The store I turned into an used book store, using the bookcases from Dutchie. And I turned my avatar into the lucky girl living right between a café and a book store. ;) 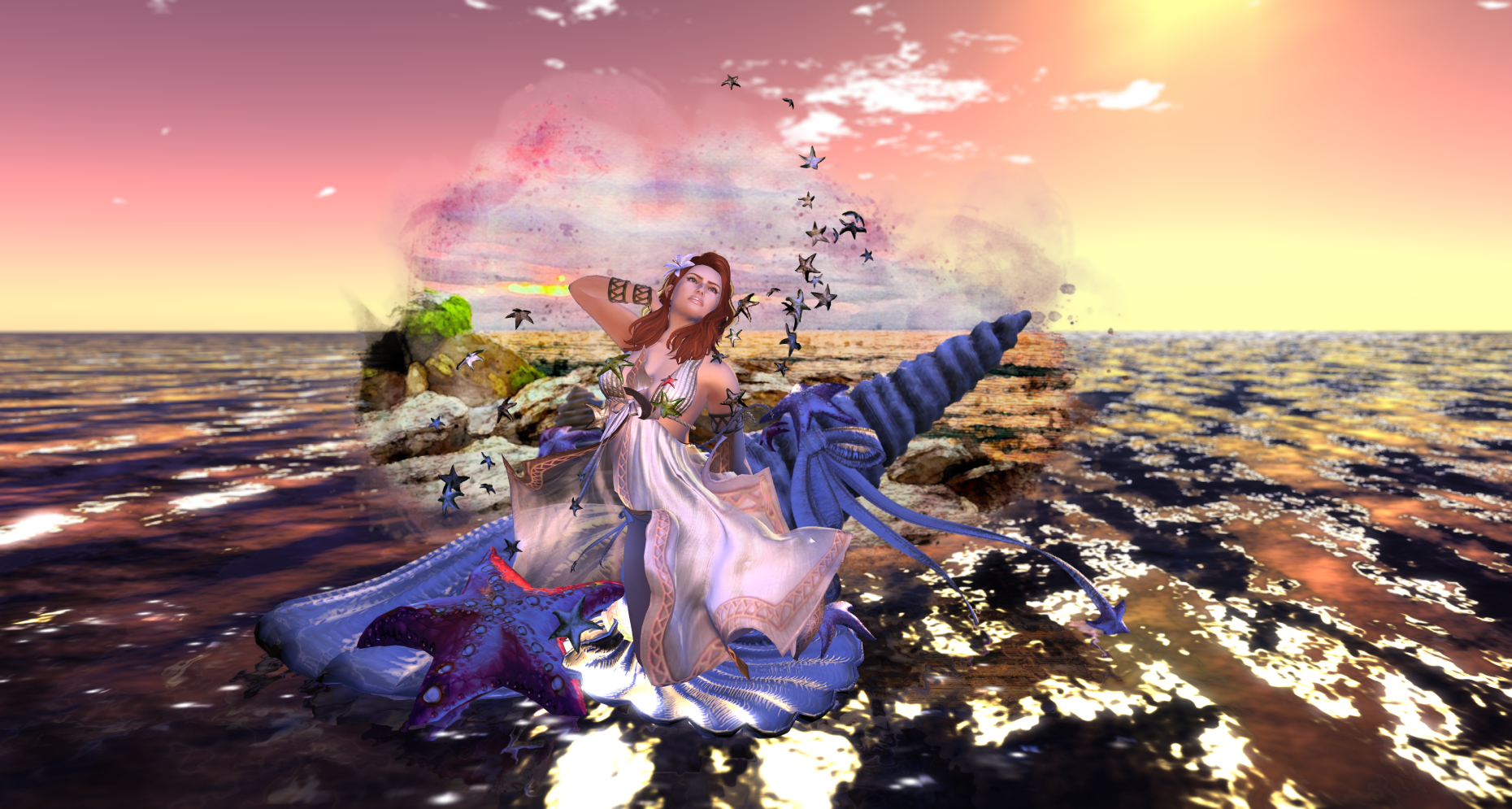 Thanks to the Second Life Destination Guide, I found Voodoo Land when looking for a spot to photo the Solitaire dress from Adam n Eve. The dress is out at the current round of the Liaison Collaborative which happens to have Viva Las Vegas as its theme. Voodoo Land isn’t quite Las Vegas, but it has a lot of great spots for city life photography. 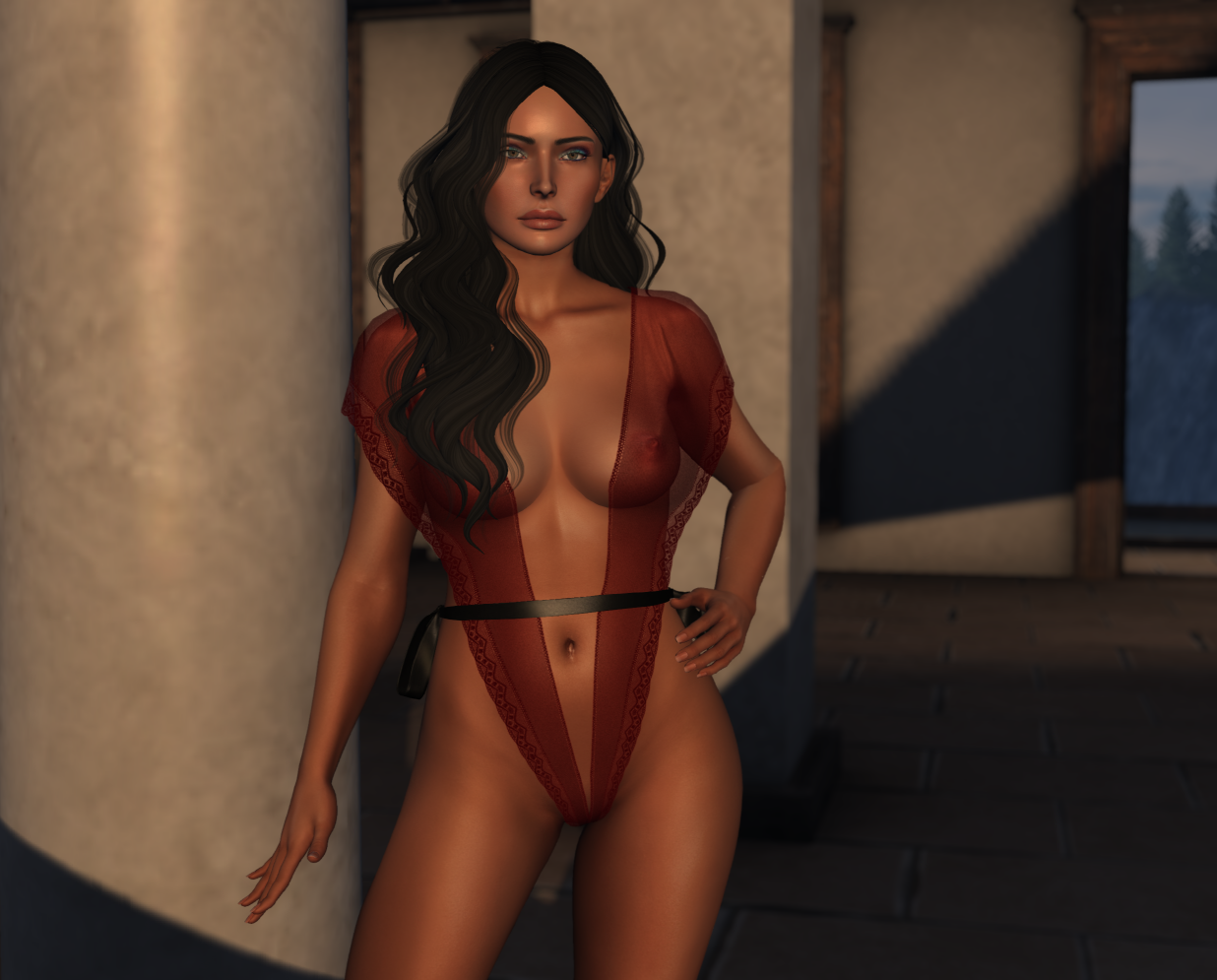 Do you have dreams of your own cosy little café? Then Dutchie’s latest release, the Red Brick Café, might just be the thing for you. To tease your imagination further, I’ve made a video looking at the interior of the building as well as showing off most of the furnishings that are included in the furnished version. You can dive right into it or read on for more details, including Marketplace links. From Adam n Eve and Deep Static comes all the hugs & kisses you might need for your time on the beach in the shape of a swimsuit and a pair of cool sunglasses which have matching colours and metal textures. Both these new releases are available at the WIP event which runs from the 2nd to the 22nd of every month. Finishing off my beach look is a new hair from Wasabi with a texture-change scarf and my skin is Skin Within’s Zoe who looks just lovely as a redhead. It is too bloody hot so my brain has melted (apart from the part worrying about global warming, which always works just fine) and this will be rather brief. I am having cravings for a swim again and as a result I keep doing beach/ocean photos in Second Life. This time I am out on a cute raft by Nomad for Fifty Linden Friday, lounging around in a gift skin from the Plastik/Petrichor for SL17B and a mermaid bikini from Aleutia, plus the latest hair style from Wasabi.