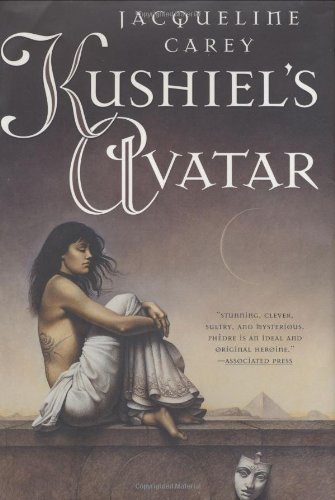 Since stopping Melisande’s plot to overthrow Queen Ysandre, Phèdre has had ten years of peace together with Joscelin. However, all that time the shadow of Hyacinthe has still hung above her, and she has never stopped trying to find a way to release him from the task he took upon himself. Other concerns have nagged at her mind too, such as the whereabouts of Melisande’s hidden son, third in line for the throne of Terre d’Ange. These two matters then become inseparably linked as Melisande sends for Phèdre, and reveals to her that Imriel, her son, has gone truly missing. Now she wants Phèdre to try to find him, and as payment for this service she is offering something that may be the only thing that can help find a way to free Hyacinthe.

Even though Phèdre has strong misgivings about where this choice might lead her, and even though Joscelin is strongly against the idea, she cannot refuse to do what Melisande asks of her. Thus she finds herself set on a path that will take her places darker and more terrifying than anything she has previously faced, and almost at once she feels that this time too much may be asked of her. For the first time in her life, she truly questions her role as Kushiel’s Chosen, and she begins to wish that she no longer had to carry the burden of being an anguisette.

The misgivings and fears that Phèdre feels result in an uncomfortable, almost claustrophobic mood in the book, as the sense of dread and despair builds stronger and stronger the closer Phèdre comes to learning what has become of Imriel. Throughout the first half, the book gets darker and darker, but at the same time it is almost impossible to put it down. It is almost like walking into a house where you know you will find something terrifying, but even so you cannot stop yourself from going further and further in, no matter how sick to the stomach you are feeling. In this case, the end of this particular journey more than lives up to the foreboding feelings stirred up along the way, and many readers will no doubt find some of the crucial sections of this book very difficult to read.

The conclusion to the Kushiel’s Legacy trilogy is stronger than the middle book, but perhaps not quite as strong as the first one. The first half of the book is excellent, but the second half is a little weaker, though this may have a lot to do with the fact that you are likely to come out of the first half quite emotionally drained. Among the strongest points of the book, apart from the relationship between Phèdre and Joscelin which I find to be very realistically drawn with much consideration given to the problems such a couple would face, is how Carey handles Phèdre’s reactions to the things that befall her at the hands of the Mahrkagir.

Posted at 00:38 CET by Linda
Books
< Previous | Index | Next >
Commenting is not available in this channel entry.
Otherworldly