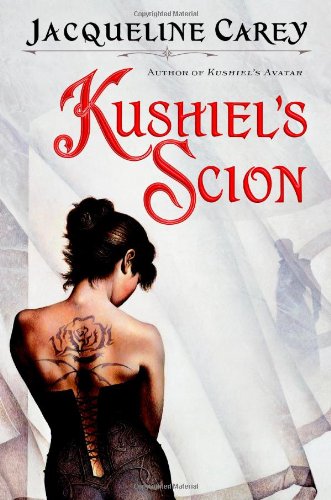 Sometimes, it is difficult to say what is harder to deal with: who you are, or who you aren’t. Imriel nó Montrève de la Courcel, son of Terre d’Ange’s most infamous traitor, the deadly beauty Melisande Shahrizai, and foster-son of its most famous heroine, Phèdre nó Delaunay de Montrève, finds himself in such a situation. He despises his real mother and idolizes his foster-mother and her consort, Joscelin. But he cannot escape Melisande’s legacy, which makes him suspicious in the eyes of some and a worthy heir to the throne in the eyes of others, any more than he can hope to be a great hero, chosen by the gods to save all of Terre d’Ange. Instead, he must try to find his own path in life.

That, however, is easier said than done. The terrible ordeals suffered by Imriel at the hands of the Mahrkagir have scarred him deeply, and paired with the often dark and disturbing legacy he has inherited as a true scion of Kushiel, he is left very conflicted indeed. With his mother in mind, he wants to try his best to be good, but he soon finds out that this isn’t always so easy. In fact, sometimes it is hard to say what is good and what isn’t. Imriel finds himself greatly troubled by some of the things he learns about Phèdre’s past, not the least because he himself struggles with the dark desires that are part of his inheritance as a Kushelite.

Kushiel’s Scion picks up some years after the end of Kushiel’s Avatar, but although this is also a book told from a first-person point of view, the narrator is now young Imriel, who is a very different character indeed from Phèdre. While she may at times have wavered under the burden placed on her by the gods, and feared that she may not have the strength to complete her tasks after all, she always knew what her destiny. She suffered in the flesh, and she suffered when her path brought pain to those around her, but she was rarely plagued by doubts and uncertainties.

Imriel, however, is a very troubled young man, which makes him a very different narrator and gives the book a very different tone compared to the three previous ones. This book is primarily about Imriel’s internal struggles, and not about saving the world. However, that is not to say that there isn’t plot aplenty. After all, as much as Imriel might like to deny his true parents, he is still a prince of House Courcel and third in line for the throne. As a result, some people would like to see him on that throne, given that the Dauphine is not a pure D’Angeline, and some would very much like to see him dead just in case he has inherited any of his mother’s ambitions.

Like the previous three books, Kushiel’s Scion is deftly written, with both engaging characters (the supporting cast is quite large and colourful in its own right) and a story that pulls you along for quite a ride. The scope is not as grand as in the books about Phèdre, and compared to Kushiel’s Dart it feels a little more like a ‘regular’ fantasy trilogy, in the sense that the first book appears to set the stage for some bigger action in the next two. Having said that, however, most of the plotlines opened are resolved within this book, and the stage-setting that is done is intriguing enough to make you start anticipating the next book (apparently called Kushiel’s Justice) already.

For my own part, I liked it almost as much as Kushiel’s Dart, though I did not find it quite as erotic as that one. It is by no means lacking in adult content, as Imriel is a young man with an appetite, but he is not an anguisette who makes his living using his body. I suspect, however, that it may very well appeal more to some of those who found the sexuality in the first three books a little hard to stomach. Then again, Imriel is clearly showing signs of being a true scion of Kushiel, so I expect the next one may not be ‘safe’ in that respect.

Posted at 12:01 CET by Linda
Books
< Previous | Index | Next >
Commenting is not available in this channel entry.
Otherworldly