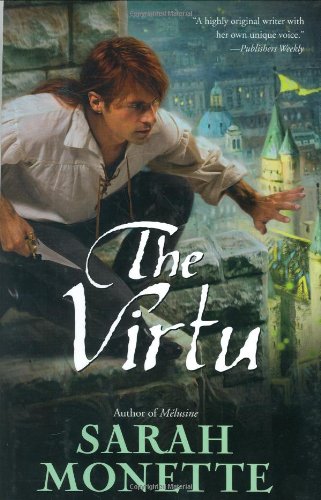 As I noted in the review for Mélusine, The Virtu and it were apparently originally intended as one book rather than two separate volumes. And, as I also noted, this does show. The Virtu picks up pretty might right where Mélusine ended, with Felix’s sanity and his powers restored. Half the journey has been completed, and what remains now for him and Mildmay is to return home to Mélusine so that Felix may attempt to mend the Virtu, broken with his powers but not by him in the first book.

The main problem with The Virtu is that it feels a little too short. I thoroughly enjoyed it, but I would have enjoyed one large volume containing both Mélusine and it even more. That would have been one large, completely satisfying multi-course meal perfect for one long sitting. Now we got a very nice dinner first but then the dessert meant to go with it came in much later. Additionally, reading them too far apart may lead to you forget little things from the first book that end up coming to the forefront towards the end of this first arc in the story of Felix and Mildmay. Such as the brief introduction in Mélusine. There’s also the issue of story balance to consider, and while I originally thought that there was too much of mad Felix in Mélusine, I can now see how that part would takes up a much more reasonable amount of space when one considers Mélusine and The Virtu as one story.

Still, the break between the books does occur at what I would consider the natural halfway point of the story. They’ve reached the far end of their journey, now they’ll be going back, and some things are neatly reversed from the first half of the story. With Felix restored to his sanity and Mildmay’s leg still badly off, the power balance between the two half-brothers has shifted. Felix still needs Mildmay to get him out of some tight spots, but once they get back to Mélusine it is often the other way around. As the book progresses, Felix also grows more likable in general. He’s still a quite broken individual who rarely hesitates to take out his own problems on other people, but both he and Mildmay are definitely growing both fond of and dependent on each other.

The Virtu also introduces a third important character (whom I believe will be a point of view in the next book, The Mirador), a young woman by the name of Mehitabel Parr. She ends up accompanying the two half-brothers for most of their journey, and with her present Mildmay’s chapters in particular end up being less internalized. For me, this meant they were easier to read than in the first book, and I suspect that others will feel the same about Felix on account of him being less mad and more sympathetic.

As alluded to already, the plot in The Virtu focuses on Felix’s desire to undo the damage done to the Virtu by Malkar. But there are also other plot threads, some from early on in the first book, that are revisited and, in most cases, dealt with. Given this, the ending of the book is quite satisfying, even though more than a few hints of things to come in future books are planted throughout the latter portion of the story.

Posted at 01:19 CET by Linda
Books
< Previous | Index | Next >
Commenting is not available in this channel entry.
Otherworldly