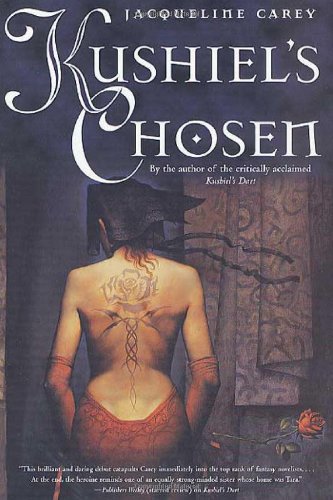 In the second book of Kushiel’s Legacy, the story of Phèdre is given a worthy continuation, though in many ways it is a very different book from the first one. This was to some extent unavoidable, however, given that Kushiel’s Dart was focused around Phèdre’s coming-of-age. Here, however, we meet a more mature heroine. Following the events of the first book, Phèdre is living a relatively quiet life in the countryside, something that probably would have started to wear thin sooner or later, save perhaps for the distraction offered by her continued attempts to search for a way to free her friend Hyacinthe. However, it turns out she has no reason to be worried about growing bored, as she finds that she must once again take up her duties as a Servant of Naamah in order to uncover what the elusive Melisande—escaped by the help of a traitor in their midst—now plans to do.

The story that evolves from this premise combines the sometimes headache-inducing intrigues of the first half of Kushiel’s Dart with the fast-paced action of its latter half, as Phèdre finds herself taken on yet another adventurous journey—once again courtesy of the deadly intrigues of Melisande Shahrizai—outside of Terre d’Ange.  In the course of this, she also finds herself on a journey to discover more about her true nature as an anguisette, while Joscelin finds himself on an altogether different path, which may very well spell the end for their in some respects very fragile relationship. The book also explores some of the cracks in the façade when it comes to the sometimes almost too-perfect seeming society in Terre d’Ange, showing the flaws within the system and that the standing in which the Night Court is held has been gradually faltering. It also reveals—perhaps as a warning example of where Terre d’Ange could be heading—how very different matters of love and sex are viewed even in neighbouring countries such as La Serenissima.

Like the first book, Kushiel’s Chosen is a lush feast for the senses both when it comes to the prose and the story. And, of course, in regards to the erotic elements, which are handled just as well as within the first book. Having said that, the book does suffer somewhat from being a middle book, though to a large extent this is an unavoidable effect of the first book having been so relatively unique within the genre, but the plot is interesting and the character’s are engaging. It does feel a bit like a transition from one stage to another, but this is something that is mirrored by the developments within the book, as Phèdre and Joscelin find themselves at a crossroad that may or may not take them in different directions depending on whether or not certain aspects of their lives can be reconciled.

Posted at 01:06 CET by Linda
Books
< Previous | Index | Next >
Commenting is not available in this channel entry.
Otherworldly