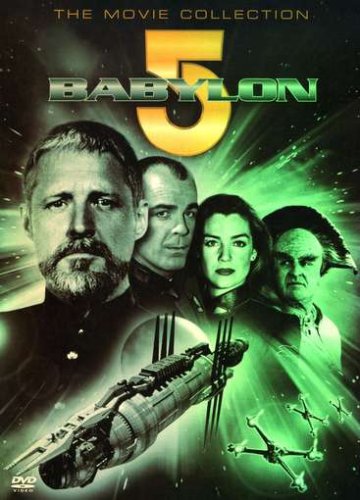 When word first began to spread that a brand new science fiction series that wasn’t Star Trek (of which, I should hasten to add, I was and remain a fan) was in the works, no doubt there was a lot of incredulousness about it’s chances. But the creator of this show, J. Michael Straczynski (better known on the Internet as JMS), argued passionately for it. He promised an epic scope such as had never been before in genre television in the U.S., with a five-year arc played out in a novel-like fashion with each season corresponding to a part of classic dramatic structure: exposition, rising action, climax, falling action, and denouement. It was incredibly ambitious, and seemed to good to be true ... but it wasn’t, for the most part, as JMS delivered on just about everything he promised.

Babylon 5 faced a rocky road to begin with, as JMS tried to find support. He actually pitched it to Paramount, who passed after spending a judicious time sitting on it… only, strangely, to have Star Trek: Deep Space Nine—set on a space station that served as a nexus of trade and diplomatic contact, featuring a once-subjugated race rubbing uncomfortably-close with its former conquerors, and so on—announced and put into motion with a great deal of money. Some, in fact, came to think that Babylon 5 was "inspired" by DS9, rather than the other way around, because DS) premiered before B5’s pilot—but that was just funding and backing talking; DS9 was put together with remarkable alacrity.

Regardless, B5’s pilot episode did air. The Gathering was ... different. The station—the fifth in a series of stations created by the Earth Alliance in the aftermath of the devastating Earth-Minbar war (which Earth technically won, as the powerful Minbari mysteriously surrendered at the very cusp of destroying Earth)—is "a port of call - home away from home for diplomats, hustlers, entrepreneurs, and wanderers." The earlier four, of course, were destroyed by sabotage or (in one case) mysteriously disappeared, so B5 isn’t the safest place to be. But still, the humans try, and the alien races give it a try to see if there’s some value (or profit) to it.

The main cast is made up of the primary Earth Alliance officers running the station and several alien ambassadors who are part of an advisory council that is not dissimilar to today’s modern U.N. Security Council. What’s interesting about the casting is how much changed and how much stayed the same when the series properly began—the second-in-command, doctor, and telepath (yes, by 2258 Earth has actual, working telepaths) are replaced by new characters (and actors), and the alien ambassadors have their make-up (and characters) significantly refined and polished; this can best be seen in the make-up of the Minbari ambassador Delenn (played by Mira Furlan, lately of Lost fame), which initially was intended to obscure her gender because initially she was intended to be ... male! For technical reasons, it wasn’t followed through, and just as well—Mira Furlan is an expressive actress, and the more masculine make-up threatened to obscure some of her best qualities.

The pilot itself, like most pilots tend to be, in uneven. JMS realized this afterwards, and when he had the opportunity to re-edit and score it over again for TNT, he leapt at the chance (it’s this edited and uniformly-superior edition that’s available in the U.S. movie collection) to do so. Still, even in the original, the promise was very high. Michael O’Hare as Commander Jeffrey Sinclair was an intriguing choice for lead—a survivor of the terrible Battle of the Line with survivor’s guilt and a death-wish, a man full of gravitas and restraint with a terrible "hole in his mind" that haunted him. While his performance in this pilot betrayed his origins in theatre in some negative ways, it also lended weight to some of his best scenes, where he’s able to project a great deal of depth with his eyes (always sad, even when he’s smiling) and his warm voice. It’s fitting that in the pilot, not only is he the man in charge, he’s also the focus of the central problem of the pilot.

That problem, in brief, is the poisoning of the last of the major ambassadors to arrive: Kosh of the Vorlon Empire, the most powerful and mysterious of all the aliens in the galaxy. The Vorlons threaten to blow Babylon 5 to bits because of this, and it doesn’t help when the poisoner is revealed to be ... Sinclair himself (or so it seems). What follows is a breakneck chase for the true culprit, all the while running up against the foibles of some of the other ambassadors and lead characters, and revealing a great deal of the background without info-dumping. The resolution leaves one wanting more, because it opens as many questions as it resolves, questions that will be examined and (eventually) answered as the series progressed and the cast changed (including O’Hare, whose departure at the end of the first season led to a great deal of sturm und drang from the fan community).

The production values aren’t the best, but are understandable given the limited budget they had to work with (far more limited than what DS9 was going to get—if I recall correctly, the 2-hour pilot for B5 cost about the same as a single 1-hour DS9 episode), but there’s a good effort made to make the most of it. Particularly pleasing is the lighting, which lends a great deal of darkness to the underbelly of the station, which is quite a difference from the pristine starships like the Enterprise. Most notably of all, and the most revolutionary, was the CGI used to render the station, spacecraft, and space. Though relatively primitive compared to the heights that would be achieved by the 3rd season, it was eye-opening to see the station, “two million, five hundred thousand tons of spinning metal, all alone in the night,” with its body slowly rotating (no "graviton particles" here—at least, not with Earth technology). It’s been said that the producers of Star Trek scoffed at it, saying that they’d stick by the tried-and-true models, but it took only a few years for them to change their tune—CGI is a far superior way of depicting space and spacecraft, not least because it allows a three-dimensionality of movement that models didn’t really allow. Combat didn’t take place on a plane, but became real "furballs" with nimble fighters swarming around massive cruisers.

Ultimately, The Gathering has to be understood in light of the circumstances in which it was made. Is it the best pilot ever created? Not by a long shot. Is it as good as the best episode from the first season? Not even that. But was it a good beginning, a sampling of things to come, and a promise that interstellar science fiction on television could be something other than Star Trek? Absolutely.

Posted at 00:42 CET by Elio
Media
< Previous | Index | Next >
Commenting is not available in this channel entry.
Otherworldly