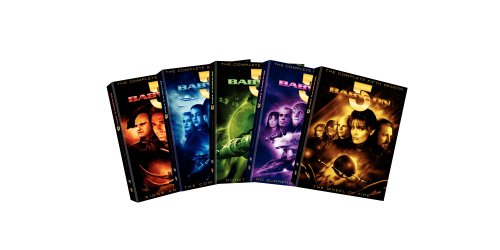 After a long delay during which funding for the series was somewhat up in the air following the production of the pilot, the first season of Babylon 5 finally appeared. The question is, how was it? It was good, but not great. It certainly showed some distinct differences from its predecessors in the genre—especially Star Trek, whose then-latest series, DS9, would turn out to be rather a pale, tradition-bound shadow of what B5 was to become—but at the same time it moved a bit too deliberately. As noted previously, JMS envisioned the series as following a typical dramatic structure, with each season being one part in that structure. The first season, naturally, was largely devoted to exposition: introducing us to the characters, races, and setting, as well as beginning to lay down the various story lines that would resonate for characters, for the season, and for the entire show. JMS succeeded fairly well in painting in the background while still leaving mysteries, but the natural result was that the viewer wasn’t quite thrown into the deep end of the story, nor did they feel the kind of urgency that would develop in the second and, especially, third and even fourth seasons.

Looking back at that previous paragraph and its faint indictment, I realize that I’m actually holding up the first season to the standard of the later seasons of B5. But why do that? What B5 did was quite extraordinary for genre television of the time—indeed, for pretty much all television to speak of. Who else was, seriously, planning out entire seasons in advance with the notion of providing viewers a vast epic with a beginning, middle, and end? Compared to, say, the first season of Star Trek: The Next Generation, Babylon 5 was doing very well indeed, given the “handicap” of having to introduce an entirely new setting rather than, like TNG, being able to depend on viewers having passing familiarity with the basic setting. The production values, certainly, weren’t so high—B5 never had the money of the big, banner-waving shows from Paramount—but they made up for it with inventiveness and commitment. The CGI, while still in its relative infancy (just compare a Starfury from the first season to one just a season later), opened up the scope of the action quite nicely (although again, the really huge CGI feasts would have to wait until the second, third, and fourth seasons). Particularly noteworthy is the early use of a fully CGI alien in the episode “Grail” (featuring David Warner), which I think must have been an early first for dramatic television at the time.

Looking at the first season, and given its place as providing the details of the setting, it might be best to discuss the characters we meet in the course of the show. As leading man, Michael O’Hare proved to be somewhat controversial—some viewers didn’t warm to him, while others would be scandalized by the unexpected developments that led him to leave the show at the end of its first season—but I’m one of those who took to him. You could tell that there was a certain theatrical style to his acting which didn’t quite fit, but you could also tell that he was starting to get the hang of it as the series progressed. He brought gravitas to the role of Sinclair, and a distinct amount of reserve which perfectly suited the Jesuit-educated war hero/survivor with something of a death-wish. In particular, he worked wonderfully with his eyes, giving off the hint of a noble man who was removed from those around him by a grief and confusion that no one else could understand (and that even he, with a “hole in his mind”, didn’t quite comprehend, either). It would have been very interesting to see where the show would have gone had he remained through the five year story.

Claudia Christian entered the show as the new second-in-command, and did a fair job to begin with. She certainly seemed to take to television a bit more readily than Tamlyn Tomita (who was the second-in-command in the pilot). Her character—a strong-willed young woman wanting to prove herself, haunted by the tragedies of her past and made more appealing by her amusingly Russian sort of cynicism—would grow on fans as the series progressed. So, too, did that of Jerry Doyle, returning from the pilot as Michael Garibaldi, chief of security. As we learn about him, he’s a man with a past (I should probably stop saying that; everyone has a past on B5) who’s doing the best he can to keep the station safe. He’s a prototypical beat cop—he’s got a cop’s sense of humor and a cop’s manner, always filing things away, always watching—and he plays the role just right.

Two more new entries are Richard Biggs (who, sadly, died only a couple of years ago at the too-early age of 44) as Dr. Stephen Franklin, head of the medical facilities on a station that has a population equal to a city. Young and idealistic, he’s driven to heal, and that causes conflict from time to time (most notably in the episode “Believers”, in which Franklin is confronted with the family of a boy who’ll die of an easily-corrected problem ... but their religious beliefs prevent surgery). His strongest story arc, however, begins to develop in the second season and culminate in the third season. Finally, Andrea Thompson (now on CNN, I believe) takes on the rule of Talia Winters, a telepath coming onto the station after the departure of the previous telepath (played by Patricia Tallman in the pilot). She brings something of a smokey, noirish femme fatale quality to the show—not that her character is a femme fatale (....) but because Psi-corps telepaths are considered untrustworthy in the setting, and she always looks just a touch too elegant.

What really made the show, however, is the aliens. I won’t repeat everything I said in the previous entry for the pilot, but Mira Furlan and, especially, Andreas Katsulas and Peter Jurasik, bring so very much to the show. Without them, I doubt it would have made it. Furlan’s Delenn, in particular, plays an important role in this exposition-heavy season, and she does it admirably. The change’s she’ll grow through in the series are quite noteworthy, though perhaps they seem muted next to those her fellow ambassadors go through. Katsulas’s G’kar and Jurasik’s Londo are presented as a scheming villain and a harmless old drunken buffoon to begin with, but when fans talk of the show and why it was great, it’s their character arcs that are almost always among the first things mentioned.

The first season had its share of bad and mediocre episodes. “Infection” just didn’t play well at all (and is, if I recall, the lowest rated of all the B5 episodes in the fan P5 Rating list) while “TKO” with its rather silly idea of alien martial arts competitions just seems out of place (and probably exists largely thanks to notes from the studio calling for more action) distracts from the more interesting B story which features Ivanova sitting shiva for her recently-deceased father. On the other hand, the show also had some truly excellent episodes, from the intriguing, Sinclair-focused “And the Sky Full of Stars” (beautifully named) to “Signs and Portents” (one of the most important episodes in the series, introducing as it does the unctuous Mr. Morden and his mysterious employers) and finally on through “Babylon Squared” (another very important episode, whose importance is only realized half way through the third season) and the momentous “Chrysalis” when everything changes.

The close of the season, ending as it did on a high note of drama and mystery, was a portent of greater things to come in the second season. The exposition phase was done, so to speak, and now the rising action could begin.

Posted at 00:22 CET by Elio
Media
< Previous | Index | Next >
Commenting is not available in this channel entry.
Otherworldly