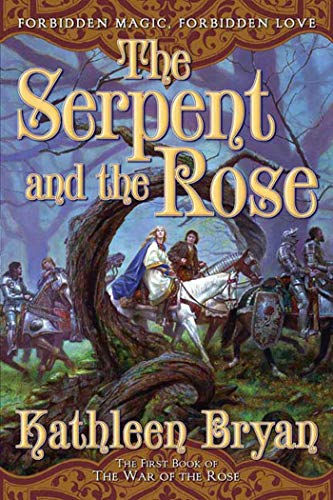 A thousand years ago, order defeated chaos as the Young God vanquished the Serpent. Though the victor died in the process, the Serpent was imprisoned, and out of the Young God’s followers grew an order of Knights sworn to make sure it remained that way. But now the king of Lys seeks to increase his might by turning to darker powers, and the servants of order have so successfully banished chaos that none of them have any real knowledge of how to fight its growing influence. Only Averil, heir to a duchy not yet under the king’s sway, and Gereint, a fatherless commoner with dangerous talents, are able to offer resistance as the Serpent strikes again. However, to stand any chance, they need to turn to magic that lies outside the orderly ways of the Knights of the Rose, magic that is wild and unpredictable.

As might be guessed from this short introduction, magic plays a considerable part in The Serpent and the Rose, and virtually all characters that appear in any notable capacity are magicians of one kind or another. This is not surprising if one is familiar with previous books by the author; though it is billed as a first novel, Kathleen Bryan is in fact a pseudonym for Judith Tarr, who often writes books where magic and magical beings play important roles within settings that always are well grounded in history. In this case, the story takes place in a time and place heavily inspired by medieval France. There’s a church that in some ways parallels the Christian Church, though in other ways it is notably different, and the geography of Lys and its neighbours is similar to that of the real world. As always, Tarr’s knowledge of history shows itself in the small touches that makes a created world convincing without burdening it with too much detail. Equally typical of Tarr is the clean, elegant prose, and she has a particular knack for writing about magic in a way that makes it seem perfectly natural and believable.

The main characters, Averil and Gereint, are well-drawn and believeable, though in contrast this first book leaves little room for development of the villains of the story. The story alternates between Averil’s and Gereint’s perspective, and in addition to the larger plot of the battle against the Serpent’s followers, their gradual growth into their new roles—they are both quite young at the start of the story, and Gereint in particular changes quite a bit—also plays an important part. The romantic elements are, to my mind, relatively understated, building up slowly and quite subtly throughout the book. One might suspect, however, that future books (this is the first of three) will see this part of the story come to the forefront.

Overall, I quite enjoyed this book, and I imagine that fans of Tarr’s previous novels would as well. There are some thematic similarities—I am thinking primarily about the chaos vs order conflict, and the suggestion that there’s more to this dynamic than a clear-cut opposition—to other of her novels, such as the Avaryan series (Avaryan Rising and Avaryan Resplendent) or the White Magic series (written under yet another pseudonym, that of Caitlin Brennan, and beginning with The Mountain’s Call), and the writing is as elegant as ever. If you haven’t read any of Tarr’s books before, this might not be a bad start, though if you prefer your fantasy with a little more of an edge you would probably prefer the Avaryan series or the Hound and the Falcon trilogy. Its also worth noting that although this book is the first in a trilogy, and it definitely sets the stage (not to mention whets the appetite) for act 2, it does not end on a cliff-hanger but rather consists of a self-contained story arc with a clear ending of its own.

Posted at 20:30 CET by Linda
Books
< Previous | Index | Next >
Commenting is not available in this channel entry.
Otherworldly