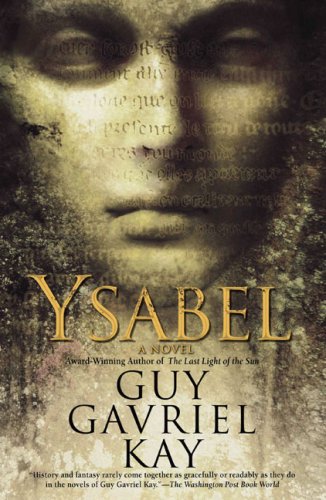 A new book from Guy Gavriel Kay is always a treat, and a rare one at that, as there’s always quite a few years between them. Given this, one tends to build up fairly high expectations, which isn’t always fair to the book (or the author) as these expectations often end up being heavily based in one’s own preferences as a reader. First impressions of a book are particularly vulnerable to comparisons between what is and what was expected. No wonder, perhaps, that this review has already been tweaked twice. First I reworked it slightly based on some feedback that led me to conclude that I had not made it clear enough where my tastes and expectations interfered with my understanding of the story. And then I did some further work on it once Elio finished the book and we had had a chance to discuss it.

One might now wonder what inspired this introductory paragraph. To some extent, its a caveat regarding my impressions of Ysabel and the way they come through in this review. It might be deduced from this that I did not find Ysabel to be my favourite among Kay’s novels. Having said that, however, I do consider it a very good book, and some readers may in fact find it preferable to some of Kay’s other novels. It all comes down to which aspects of his writing one prefers. For my own part, I am one of those Kay fans who dearly loves the Fionavar Tapestry. In fact, if asked to rank Kay’s books, I would put them first, even though they do have their flaws. But this comes down to my favourite aspect of Kay’s writing being the intense emotions, and nowhere are they stronger or rawer than in the Tapestry. In later novels, some of that intensity is traded away for increased polish.

Up until now, this was most readily apparent in The Last Light of a Sun, and Ysabel follows in those footsteps in that regard. But where I found that Last Light of the Sun seemed to be that way very much on purpose, allowing for a more distant observation of the story and the characters, Ysabel seemed to me to have come out this way partly because of the modern setting and partly because some elements did not quite have the impact that I was expecting them to have. However, as I already noted, expectations can be dangerous baggage and after discussing this with Elio, I would probably agree with him that there are clear similarities between the approach to the story in Last Light of the Sun and in Ysabel. However, the idea that each person’s story is the most important to them even if it is not important to the ‘big picture’ seemed to be laid out more clearly in LLoTS, not the least through the little vignettes. There are, however, several pretty clear indicators of this theme in Ysabel too.

The story in Ysabel is that of Ned Marriner, the son of a famous photographer. Over the summer, he is accompanying his father to Aix-en-Provence, where the father will be taking pictures for a book. Almost as soon as he arrives, he and Kate—a girl he encounters in a cathedral—stumble into an old story that is once again playing out in the ancient town. Her interest in history and the unusual gifts that Ned begins to manifest draws them into what is happening, and as May day—Beltaine—comes around they become deeply entangled with an age-old love triangle that has been at the centre of much bloodshed over the last 2500 years.

Ned is an unusually young protagonist for Kay, and in many ways Ysabel reads like a Young Adult novel. This, to me, is not in any way a flaw, because some of the best fantasy I know is Young Adult. Still, it may not appeal to some for this reason. It should be noted, however, that Kay handles Ned (and Kate, a girl he meets) quite well. Like in any good YA novel, characters of all ages act and interact naturally, without being plagued by any of the age stereotypes that affect less accomplished novels (often those written explicitly to try to appeal to a younger audience, instead of simply being written true to the story).

The prose, as always, flows beautifully, and is perfectly tailored to the setting and the characters. For the most part, it is less ‘grand’ than in other works by Kay, though the sections that are shown from the perspective of the key players in the ancient love triangle stand out from the sections seen through Ned’s perspective. Kay also plays around a bit with the use of tenses when he shifts between the different point of views, letting the three tell their stories in the present sense, which makes them feel very much as if they live only in the moment. Time and perspective are themes dealt with on other levels of the story as well, as we learn that the love triangle has played out time and time again over the last 2500 years. An important component of the story is also Aix-en-Provence itself. The landscape is deeply infused with what has happened there over the years, and through Ned’s gift this is visibly and viscerally manifested as he finds himself overwhelmed by the events of the past.

The quibble that I did have with the book was that I did not feel the intensity of this love triangle as strongly as I would have expected considering its importance. Initially, this felt like a flaw in the story to me, as I could not see why it did not resonate as strongly with me as Kay’s previous treatments of similar love triangles have, when in fact it is really a matter of taste and expectations. I love getting emotional kicks in the gut from reading, and as I was hoping for one of those here, the absence of it struck me as a flaw. However, it fits the story that these were intentionally left out. It ties into the idea of different perspectives and viewpoints, and it shows that although the participants of the love triangle thought it was of the greatest importance, they were still only three people out of the thousands affected by the events in the history of Aix-en-Provence. In fact, one of the characters does make a comment along these lines, noting that they are not unique.

Finally, a spoiler that I cannot resist. There is a surprising connection between this book and Kay’s first work, the Fionavar Tapestry. I had heard of this before reading the book, and I think that was probably just as well, as the surprise might otherwise have made me drop the book and squeal loudly. As it was, I took immense pleasure in this connection and I absolutely loved the subtle little references made here and there to events in the Tapestry.

If you have not read the Tapestry, you will likely come away from Ysabel with a few questions about some of the events, but it would not interfere with your reading experience at all. If have read the Tapestry and did not like it (I know there are some strange people out there who don’t), I think you are unlikely to be bothered by this connection.

Overall, I would strongly recommend picking up Ysabel, whether you are an old fan of Kay’s works or someone who has never tried him. It kept me up to 3 am on the day that I started reading it, as there was no way I could have gone to sleep without finishing it.

Posted at 15:44 CET by Linda
Books
< Previous | Index | Next >
Commenting is not available in this channel entry.
Otherworldly