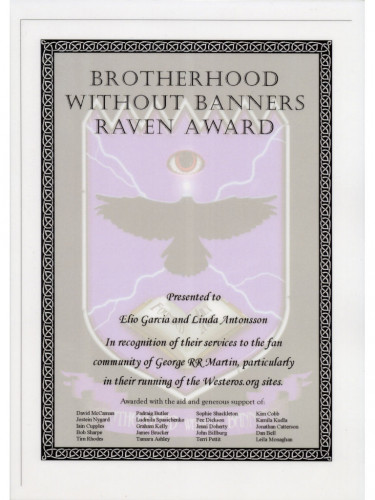 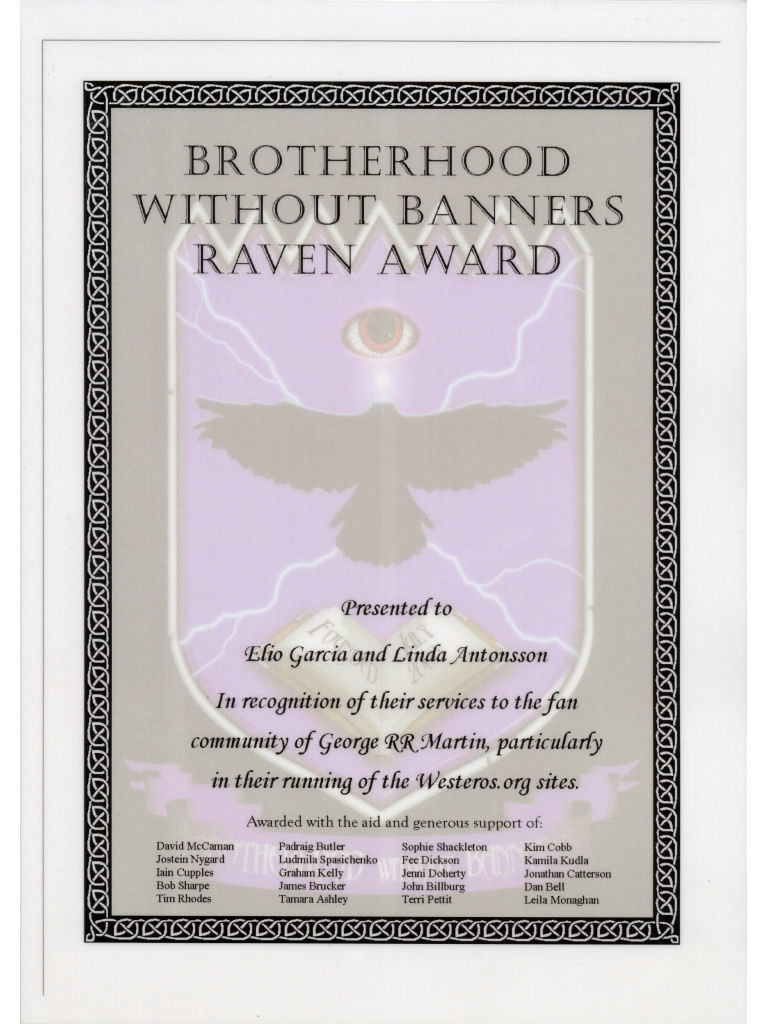 This is a scan of the lovely Raven Award which was presented to us on Saturday.

This was a complete surprise to the both of us. I was off at the Chicago room, which Linda wasn’t aware of, and as she hadn’t seen me in awhile she had been hunting for me quite thoroughly. Zakalwe7, gentleman as he is, volunteered to fetch me, and found me deep in conversation with ztemhead. At the same time, he noted George had arrived. So, we took off back to the party. When we got there, I saw mormont was up on a chair addressing the (very large) crowd packed into our room, thanking them for coming and things like that. I snapped some pictures. He invited George up to the chair, and George thanked everyone too, and talked a bit about his fans, and how they were here because of his books, but also because of two other people…

Linda and I looked at one another (between my taking pictures), as understanding began to dawn. Those two people were ourselves. In his hand, George held the first-ever Brotherhood without Banners Raven Award, given to a person (or persons) who had contributed greatly to GRRM-fandom. It was pretty stunning when he called us up, even if we had started to put two and two together, and it was weird how a path just opened up to let us through to where George was. Hands were shaken, many pictures were taken (at least, that’s what I recall in a daze—I saw quite a few flashes, but that may just have been shock), and eventually I was called up to make a speech.

I don’t recall much of it, other than the fact that the crowd was extraordinarily attentive—half of them, near as I can tell, weren’t even BwBers—and for that I was grateful, as I’m not one with a booming voice. I also rambled, but there you have it. I thanked everyone, because it was just such a surprise and such an honor, and we were both grateful to be recognized this way. We noted that the board—the real genesis, I think, of the BwB, because Westeros.org alone wouldn’t have done it—was originally founded by Revanshe (all praise to her), and I sort of carried it on after she had no more time for it. I think I tried to say how I’ve always felt that our role in it all was small—it’s the community that makes the board what it is, and it’s the fans that make the BwB what it is. The board, and myself, play only an incidental role in this—I imagine if Revanshe had passed her board to some other person, they would have done just as fine a job hosting the community, and perhaps they’d be the one receiving the award.

And then I finished up with a few more thank yous, overwhelmed. If I drank, I might have proposed a toast—to George and Parris, of course, but more importantly to the Brotherhood, from the newest member to its august founder. It was the highlight for the convention for Linda and myself, and we’ll be framing the award and hanging it in our computer room.

Once again, thank you, one and all. We hope to be present when future awards are given to those who’ve made lasting contributions to the fan community.