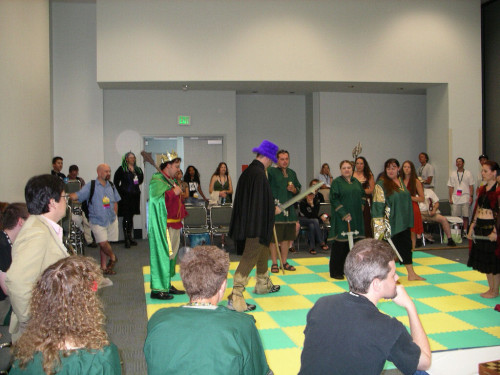 A Song of Ice and Fire George R.R. Martin Fantasy
Archives
July 11, 2005
A Clash of Kings

Picking up shortly after the events in A Game of Thrones, A Clash of Kings begins slowly but soon accelerates as events foreshadowed in the previous novel come to fruition. The beginning is the weakest part of it all (save for the fascinating prologue which brings into the reader's view one of the characters who major events will centre on), as Martin takes his time to refresh memories and to carefully put the pieces on the board. But once they're there, tension builds to a crescendo which explodes into yet more chaos. There's several major battles, some on-stage, some off-stage, and the…
read on >>
Posted at 20:22 CET by Elio
Books | PermaLink
A Game of Thrones

In a day and age where door-stopper fantasy series with no apparent endings are hitting the bestseller lists, it's often hard to consider new entries into this particular sub-genre with any seriousness. After all, if Robert Jordan or Terry Goodkind are the heights of the field, what's the point of trying anything else? But each book (or series) should be judged on its own merits - and George R.R. Martin's A Song of Ice and Fire proves that there's still room for diamonds among the rough. The first book in the series (for a long while planned as six volumes, but the exigencies of the publishing…
read on >>
Posted at 19:59 CET by Elio
Books | PermaLink
Page 10 of 10 pages ‹ First  < 8 9 10
Otherworldly