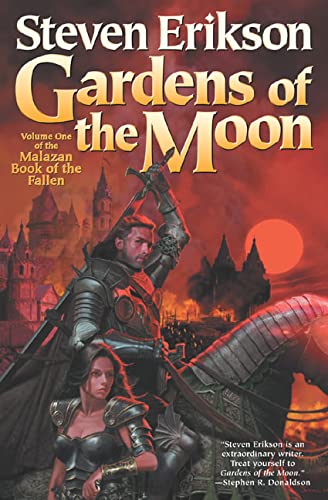 A remarkable new entry into the fantasy genre, Erikson’s Gardens of the Moon is the first of ten planned books which will make up his Malazan Book of the Fallen series. Throwing the reader straight into the action, Erikson shows the sensibilities of a trained archaeologist-anthropologist (which he is) in the easy, realistic way in which he builds up geography, culture, history, and politics. Following several different plotlines, sometimes the work is reminiscent of Glen Cook’s fine Black Company series, sometimes reminiscent of Moorcock’s famous Elric stories, and sometimes even reminiscent of Brust’s Vlad Taltos series of novels.

However, this hardly takes away from the series - Erikson’s seeming homage blend together into something all together new and exciting, and decidedly audacious. You will shake your head in wonder at some of the set pieces he creates and heaps together with deft skill. However, this does lead to a drawback: sometimes the story is lost in Erikson’s attempts to continually raise the stakes. It’s a fairly minor problem, but combined with the early portion of the novel in which Erikson seems to have swallowed a thesaurus (it is less of a problem past the first third of the book) and some failure to fully flesh out a central character who demands reader empathy but doesn’t get it (yet), it keeps the book from getting the highest marks.

Posted at 00:56 CET by Elio
Books
< Previous | Index | Next >
Commenting is not available in this channel entry.
Otherworldly