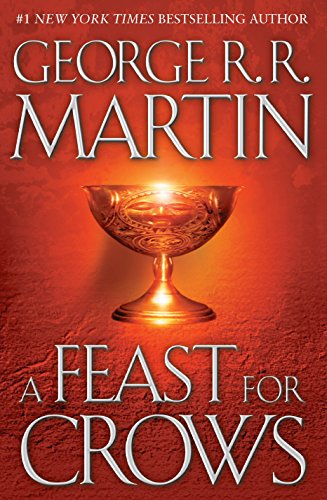 First, an important piece of information to remember about this book is that it does not contain a number of the major point of view characters from earlier novels: Jon Snow, Daenaerys Targaryen, Tyrion Lannister, and Davos Seaworth; these characters will feature in the next novel, A Dance with Dragons. Readers opening this book with the hopes of reading about these characters directly will be disappointed, but there’s no real reason to be disappointed as this novel is a success.

Focusing as it does on events south of the Neck (particularly King’s Landing and the Riverlands) and some interludes in the east (that firecracker, Arya Stark, has a few chapters), the novel is thematically the tale of what happens when the centre cannot hold and everything seems to fall into a malignant, ugly chaos. Those trying to hold the pieces together—such as Jaime Lannister—are faced with the crows who descend on this rotten feast, not least among them being the scheming and vindictive Cersei.

The chapters link together in a more subtle way than previous books, as actions and decisions in King’s Landing start to have a slow and noticeable effect on the surrounding landscape. Characters are caught up in a tide of events which threatens to sweep them away. Indeed, by the end of the novel, it’s almost impossible to guess where the sixth book of the series will go: that much happens to set the realm topsy-turvy.

Are there flaws? Certainly, it’s the rare book that doesn’t have one. Some more work could have been to heighten linkages between certain chapters. There’s an interlude which, while rewarding as a reading experience (as it provides a nice dollop of historical information regarding the late reign of the Mad King Aerys), was not particularly necessary (but that’s one chapter among dozens).

To finish up, it seems that the important question is, "Is the book worthy of its predecessors?" And the answer is an emphatic, "Yes!"

Posted at 21:48 CET by Elio
Books
< Previous | Index | Next >
Commenting is not available in this channel entry.
Otherworldly