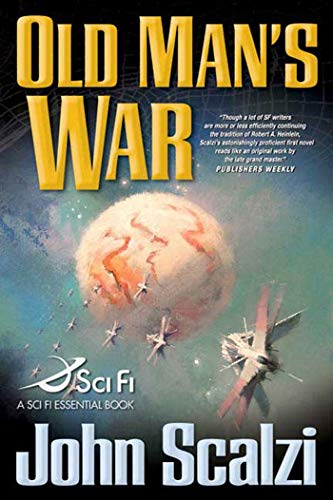 John Scalzi’s Old Man’s War,  which has made the 2006 Hugos shortlist for Best Novel and garnered Scalzi a place on the Campbell Award shortlist for best new writer, been hailed by readers as reviewers as following in the footsteps of Robert A. Heinlein. This is, as Scalzi admits, entirely the intention. Does he succeed? Perhaps too well.

My copy of The Cat Who Walks Through Walls is very nearly the most-ragged, most-reread book in my collection (only A Game of Thrones and The Lions of Al-Rassan top it). It’s the first half—“the good half” as some call it—that mostly gets me (the second half involves a copious amount of Lazarus Long and his rutting red-headed tribe), with RAH’s mixture of screwball repartee, interesting cultural observations,  and “gee-whiz” science that’s firmly lodged in the futurist vision that dominated much of RAH’s work. I think OMW shares a similar sensibility, as it tells the tale of a 75-year-old man who retires on earth and signs up for the Colonial Defense Force, which takes only retired seniors on the promise that they will somehow be rejuvenated and given a second lease on life.

The first third of the book is the rough part, though, in part because of a couple of clumsy infodumps that reminded me of those that Heinlein used to write and which, in retrospect, are a bit too clumsy for my tastes. You know the ones I mean: a pair of characters wonder about how something functions (like a beanstalk) , as if they’ve never wondered before or read anything in their equivalent of Popular Science,  and it just so happens that the neighbor on the next seat over taught high school physics and presents them with a lecture. It was so familiar it pulled me right out of the story. The repartee was also so familiar it did the same; it’s one thing for Heinlein to deliberately set out to echo the screwball comedies of his salad days—I can compensate for it (and, anyways, he did it really well)—but a tick that makes sense in a writer of that era doesn’t quite work as well for me in a modern, 21st century writer (writing geriatric characters, no less) in my mind, especially when it’s just a bit less skillfully done. It starts to feel like pastiche; very good pastiche, but pastiche none the less.

All that said, once the rough patch is dealt with—and it’s during that first third that the characters are rejuvenated in an interesting (if somewhat time-worn) fashion, with a bunch of enhancements tossed in that are named in such a way as to give a hint about the underlying socio-economic structure of the Colonies (CDF soldiers have SmartBlood in their veins, a BrainPalٙ computer in their heads, HardArm strength boosters, etc.)—it improves markedly. The story is episodic, much like Starship Troopers, and the protagonist John Perry travels the stars, seeing new worlds and interesting aliens (and killing them). There’s an interesting plot complication towards the end and a rather exciting battle, which came through to make the book’s finale a brisk, entertaining read.

I’ve some quibbles about something John Perry asks for towards the end, and the fact that the higher-ups agree to it, but other than that I’m fairly pleased. This is good showing from a new author, who’ll be one to watch. Apparently, The Ghost Brigades—set in the same universe, although with a brand new cast of characters—is even better than OMW, and I look forward to getting a hold of it. If Scalzi can move more thoroughly beyond the RAH-mold and create his own, distinct voice, I suspect I’ll be reading his work for a long time to come.

And for those wondering: no, I wouldn’t put this as my first preference for the Hugos. To be honest, I admit to being a little surprised that it made the shortlist given its flaw of being somewhat too-slavishly Heinleinian, but then SF fandom has a strong nostalgic streak, and a penchant for becoming quite enthusiastic about newcomers with the right amount of craft.

Posted at 23:54 CET by Elio
Books
< Previous | Index | Next >
Commenting is not available in this channel entry.
Otherworldly