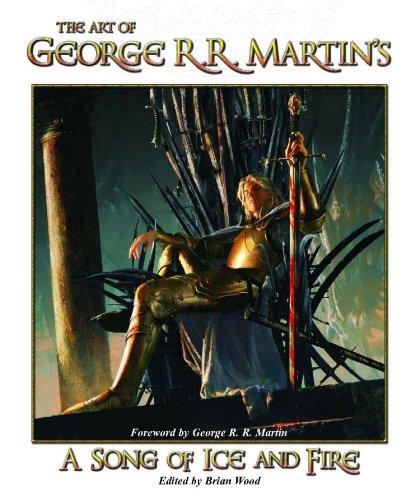 Fantasy Flight Games, publishers of the A Game of Thrones CCG and boardgame, have put together a very impressive collection of art and artists in this first and hopefully not last visual companion to George R.R. Martin’s A Song of Ice and Fire. Much of the art comes from the CCG, but they have also reprinted art from other sources, such as Meisha Merlin’s & Subterranean Press’s limited editions of the first three books and the cover art for the regular editions, as well as commissioned quite a few original pieces. The list of artists include names such as John Howe, Charles Vess, John Schoenherr, Stephen Youll, Jim Burns, Don Maitz and many, many more. Some of the art is great, much of it is very good, and even the art drawn from the CCG is on the whole of a pretty good quality.

Among the highlights of the book are a portrait of Aegon the Conqueror and his sisters by John Schoenherr, the stunning cover featuring Jaime on the Iron Throne by Michael Komarck (who also provides another great portrait of Jaime), a very nice portrait of Rhaegar by Anders Finr, several lovely images of various locations by Franz Miklis and Martina Pilcerova. And that’s just a small selection of the great art in this book. The only quibble one might have with the book is that it could have been even longer (its about 190 pages long, with many more pieces of art than that, by over 50 different artists), but hopefully another volume might follow later on. As it stands, the book is well worth its price, and if you’d like an extra nice edition you might want to take a look at the limited Collector’s Edition, available straight from Fantasy Flight Games.

Posted at 14:31 CET by Linda
Books
< Previous | Index | Next >
Commenting is not available in this channel entry.
Otherworldly