Recent Entries
Archives
From the Vaults
April 10, 2015
An Ember in the Ashes 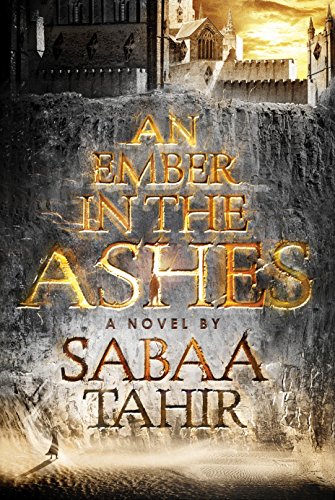 It has been quite some time since I wrote a proper review for a book rather than just sharing shorter impressions. In part, I have Twitter and Facebook and other forms of social media to blame for that, as such outlets make it very easy to offer some kind of commentary without investing too much energy; a tempting prospect when you’re left with limited such resources for various reasons. However, I can’t deny that a significant factor behind the lack of reviews has been that my reading has been way down compared to what it used to be. I used to order stacks of new books for Christmas, for summer and a few times in-between, but that hasn’t been happening of late. I think that I outgrew some of the stories I used to like but also that the genre’s become more…polarized, with grimdark at one extreme and paranormal romance at the other, and I am not really a big fan of either, at least not in very large doses. I like a bit of grit so things aren’t too fluffy but I also like a bit of romance. I very much prefer stories that feel organic in their construction and I am particularly allergic to the feeling that someone is checking off a list of worthy social concerns; of course stories can have a message and a deeper meaning, but if it feels driven by an agenda rather than a natural element of the story, there’s a problem.

That’s a long, somewhat rambling preamble which doesn’t necessarily have a specific connection to the book I am about to review, the début novel from Sabaa Tahir called An Ember in the Ashes. HarperCollins was kind enough to send us an advance copy (the book comes out on April 28th in the US and on June 4th in the UK) and after reading the blurb I was quite happy to drop whatever else I was doing and dive straight in. At this point I’ll say one of those things that I know can give authors both a sense of satisfaction (who doesn’t want to write a page-turner?) and a twinge of pain (years of writing, consumed in mere hours): I couldn’t put it down and I ended up finishing it the same day that I picked it up.

Before I get into the nitty-gritty of the review, a short presentation of the book might be in order. An Ember in the Ashes is an epic fantasy set in a world that blends various real-world periods and places. The Martial Empire echoes some aspects of the Roman Empire (most evident in naming patterns and terminology), though we don’t get enough of a look at the politics of the Empire to see how deep the similarities go. The Tribals have Arabic-inspired names and their tales are full of creatures such as jinn. There’s a fair number of books mentioned, possibly more than what one would expect in a pre-printing press society, which might suggest that some aspects of the setting are more advanced than what other elements would imply.

The story is told from two first-person narrators, Laia and Elias. Laia is a Scholar, a scion of what was the Scholar Empire until it was conquered by the Martials. They are now persecuted and oppressed by their new masters. Elias is a Martial, in training to become one of the Empire’s elite soldiers, called Masks for the silver masks they don and which eventually meld completely with their skin. Their paths intersect when Laia loses what remains of her family to the Martials, seeks out the Resistance and finds herself on a perilous assignment in order to gain their help in rescuing her brother. Meanwhile, Elias plans to desert as soon as he has graduated, though matters are greatly complicated as the imminent end of the current line of emperors is announced by the immortal Augurs and the Trials that will select a new Emperor begin.

It can’t be denied that there’s a somewhat simplistic approach to the naming of the various cultures—Scholars, Martials and Tribals signal what the are about rather directly—though this is clearly on purpose. I could see it as perhaps being intended as a way of treating them as epic fantasy archetypes, allowing the imagination of the reader to flesh them out. Certainly, the world-building is relatively shallow, sketching and hinting rather than giving in-depth information; there’s potential for an epic scope to the story, but the construction of the world has little in common with more elaborate settings such as Middle-Earth or Westeros. However, I do think that the on-the-nose names are more of a weakness than a strength. The words that are capitalized to make them stand out as specific terminology stand out just a little bit too much, rather than seamlessly blending into the story. The signposts that proclaim that “this is a secondary world” are a bit too obvious and could have been treated as more matter-of-fact by the narrators themselves. This would probably be my main quibble with the novel as a whole; you are not so easily enmeshed in the secondary world because some of the elements that define it draw your attention in a too obvious way.

The strength of the novel lies instead in the characters and the dilemmas they face, as well as in the tight, fast-paced plotting. Beginning with the characters, Laia is a nice change of pace when it comes to female heroines. She is not the strong female character you keep hearing people clamour for, which usually means they want a kick-ass woman who is physically and/or mentally strong and capable. Instead, Laia is an interesting female character, which is far better. She thinks of herself as a coward in comparison to some of her family members and she doesn’t have any special talents. What she does have is an unyielding drive to do whatever she can to save her brother who has been imprisoned by the Martials.

Elias is more of a typical character, a superb fighter but reluctant member of the “evil” Empire, but he’s written in an interesting and engaging way and his dilemma is emotionally powerful. While Laia’s personal struggle might draw a bit more interest than Elias’s, the cast of characters that surround Elias are more fleshed out than those who surround Laia, which gives each set of chapters a good balance of interesting elements. The romance element worked well for me, at least so far along in the story, though it does feature the by now rather common love triangle—or rather, it is more of a love square, but the effect is more or less the same. That said, the romance is not the primary point of the story; the attraction various characters feel for each other drives certain actions but does not act as the main motivator for most of them.

The story shifts back and forth between Laia and Elias with every chapter, which makes for some nice moments of heightened tension at points where it becomes clear that their stories will intersect. It also keeps the pace of the overall story up and you’re never left waiting too long for either character to make an appearance. The twists in the plot aren’t the most unpredictable and the revelations about the past that start cropping up later on in the story will likely feel familiar to anyone who is well-read within the genre. But this is something that I personally enjoy and I think that it is largely on purpose, much like the on-the-nose names of the cultures. This is a book by someone who is familiar with (and, I dare say, enjoys) the tropes of the genre.

It took a bit of poking around, since it wasn’t evident from the ARC I received or from the book’s website, but it appears it is marketed as YA crossover, along the lines of recent series/books by Collins (The Hunger Games), Bardugo (The Grisha), Abercrombie (Half a King and Half the World) and Haig (The Fire Sermon). If you enjoyed any of these, you’re quite likely to enjoy An Ember in the Ashes. I find it hard to compare it fairly with finished stories like The Hunger Games (which started well but where the last book was a problem) and The Grisha (which again started well but where the last book took the expected out), but it holds up well when compared to Abercrombie and Haig. My only concern about the story is that apparently it has only been bought as a stand-alone so far and while I found a comment from Sabaa Tahir saying she has the lives of her characters plotted out, with no specific plans for future books there’s always a concern that they may not happen. The book does have a good end point, but there are clearly things left unresolved and to me it really reads and feels like the start of a series, which I definitely hope that it will end up being.

Posted at 14:10 CET by Linda
Books &
< Previous | Index |
Commenting is not available in this channel entry.
Hippoi Athanatoi
MUsings
Otherworldly